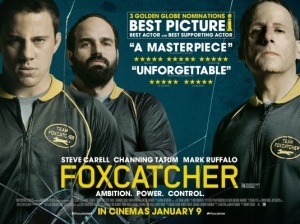 The tone of this film is one of continual dread, which makes it exhausting. The themes are insecurity, delusion and eventual madness, which makes it an even harder slog. The three characters – Olympians Channing Tatum and his older brother Mark Ruffalo and their rich patron Steve Carell (playing wrestlers Mark and Dave Schultz and heir John DuPont) – do not develop so much as wearily trudge forward to their unsurprising and dispiriting end. The script is unnecessarily overt, verbalizing explicitly what has already been well communicated visually, making the film longer than it has to be. This is just a big bummer of a flick, and despite nice performances by all three leads and some beautiful visuals by director Benedict Miller (Capote), it doesn’t have much to say about anything and what is does say is pedestrian, cold and repetitive.