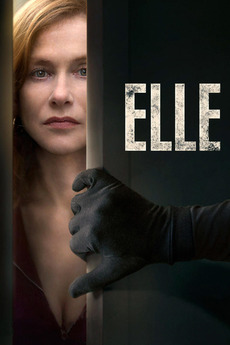 Isabelle Huppert (nominated for best actress) is a successful video game designer who is, in the film’s first scene, brutally raped. The twist is that she is already so cynically wired and self-loathing that the act does not have the consequences one might expect.  In short, she’s a tough-as-nails cookie, central to the maintenance of her successful business, dolt of a son, needy ex-husband and outrageously libertine mother.  She is also brazenly selfish, carrying on an affair with the husband of her best friend, with whom she has an almost romantic relationship.

So, when her rapist begins to text her and even break into her house to leave “mementos”, she is as much intrigued as terrified.  The result is, at its best, a Hitchcockian sexual thriller and sly comedy of manners, and, when the mystery is solved, at worst, a smugly self-satisfied weirdo tale.  All in all, a solid film by Paul Verhoeven (Black Book, Robocop), who has made a career sticking his thumb in the eyes of traditional sexual mores, usually with a taste for the violent.  Huppert is nothing less than commanding.

The politics of the film are also interesting. It has been dubbed by many critics as a “rape revenge” movie, but it is really a great deal more complicated than that.  I am guessing the moniker was affixed to ward off much of the picture’s untidy political incorrectness (as one progressive reviewer unsurprisingly notes, this is a “male filmmaker’s lurid, repeated depiction of violence against a female character, one who is defined, almost entirely, by her relationship with men, shown in nightmarish detail”).  If someone brought this baby on to an modern American campus, the viewers would likely be institutionalized and those responsible tarred and feathered. 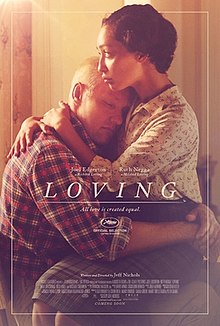 I am a huge fan of Jeff Nichols (Mud, Shotgun Stories), and in particular, his methodical, textured and grounded style of filmmaking. And boy does he exhibit all of those qualities in Loving, the story of the Virginia couple, Mildred and Richard Loving (played by Ruth Negga and the hardest working man in show business, Joel Edgerton) at the heart of the Supreme Court decision legalizing interracial marriage.  Nichols’s depiction of their small Caroline County Virginia town, with its slow pace and cloistered mentality, eschews the Hollywoodization of most civil rights flicks.  The system is wrong and cruel, and the instruments of same (the police, the courts) are in service of that wrong, but these are just people, neither mustache twirling villains or radiant, untouchable martyrs.

The problem with the film, however, is that not every historical figure is deserving of a movie treatment. George Patton, sure, but Omar Bradley?  The fact is, the Lovings, as presented by Nichols, are so simple, so unremarkable, that they feel less like leaves caught in a whirlwind or champions for their own cause and more like bystanders.  Mistreated bystanders, but mere bystanders nonetheless.  Negga shows some deftness in delivering her culture shock at having to escape to the city, and you can see a steel in her spine stiffen at the injustice at play (the Lovings were essentially banished from Virginia).  But Edgerton is so internal and non-demonstrative that he doesn’t even classify as inscrutable.  He’s just a dud, bordering on the disinterested.

It is almost to Nichol’s credit that this film is so boring.  He steadfastly refuses to dramatize.  But boring and entertainment are not reconcilable.

Perhaps Nichols sensed this flaw, because while he gets estimable but sober help from Bill Camp and Martin Csokas as the local attorney and sheriff who, respectively, assist and plague the Lovings, he tries ever so slightly to give the audience some flash in the form of comic actor Nick Kroll, as the ACLU lawyer for the couple. The gambit fails.  Kroll is, frankly, a lousy, one-note dramatic actor and it almost feels like he wants to start cracking up.  The effect is weird and off-putting.

Ultimately, this film feels like an obligation.  If you feel so obliged, go to it.