One reviewer remarks, “It’s a provocative, serious, ridiculous, screwy concoction about whiteface, cultural code-switching, African-American identities and twisted new forms of wage slavery, beyond previously known ethical limits.”  Another:  “An absurdist, startlingly original Molotov cocktail through the pane glass window of Hollywood, ‘Sorry to Bother You’ is a riot, the year’s craziest comedy and the most demented call to arms in memory.”  A third, perhaps inevitably:  “An impassioned, chaotically accurate response to dark and troubling times.”

Thankfully, Boots Riley’s debut film bears little resemblance to these painfully misguided and rote intonations, beyond being original and absurdist.  Rather, the story of an upwardly mobile telemarketer (Lakeith Stanfield of Atlanta, who is just the right amount of bewildered and decent yet persuadable) who loses his way and uncovers the most insane corporate skullduggery since “Soylent Green is people!” is playful, trippy, inventive, and surreal with a few brutally caustic comic bits thrown in for good measure.  It’s decidedly less political than advertised by the critics, and when it is political, the message is so broad and zany, you could affix it to just about any ideology you wanted.

It was mind-blowing to learn that it is the first movie for writer-director Riley, who crams so much visual creativity into the flick it eventually ends in an exhausted mess.  The picture is original in most parts, but it owes a great deal to Mike Judge’s Idiocracy.  It’s also a tad reminiscent of wacky Coen Brothers, Spike Jonze, and Scorsese’s After Hours.  Not for everyone, certainly not required to be seen in a theater, but an absolute treat when the price gets right.

What good can be said of this 1987 blockbuster that, along with The Untouchables, catapulted Kevin Costner to stardom?  Not a lot.  The film does not age well at all.  It is blocky, flat and some of the chase scenes are comically leaden.  Costner running from computer room to computer room is Hardcastle and McCormick fare, and waiting for the printer you had in college to deliver the coup de grace is pretty damn funny.  Director Roger Donaldson’s work (Cocktail, Thirteen Days, Dante’s Peak) is as pedestrian as it gets.

Then there is Will Patton. 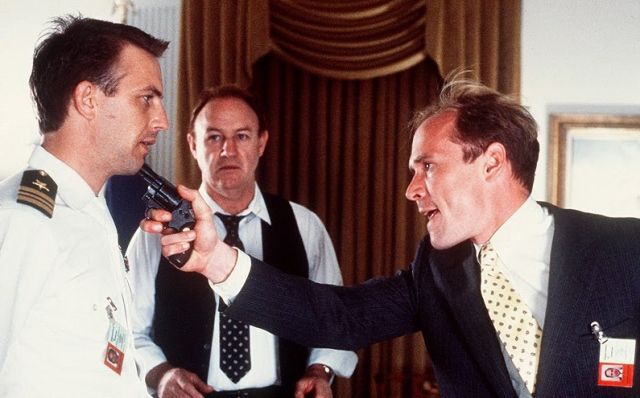 As the bad guy, he is so over-the-top, it’s hard to stifle a laugh.  His devotion to the Secretary of Defense (Gene Hackman) is akin to that of a coked-up Moonie.  He almost looks hypnotized.  And is he trying to sneak in some homoerotic longing for Hackman?  Bob Duvall, sure.  But Hackman?  It’s crazy.

That said, this dinosaur can make you nostalgic for the days of actual sex appeal in pictures.  Costner and Sean Young didn’t have a story, but they sure had chemistry, and in the days before VCRs gave way to the internet, that kind of sizzle was both bankable, a treat and a minor staple.  Think Jack Nicholson and Jessica Lange in The Postman Always Rings Twice (1981), Debra Winger and Richard Gere in An Officer and a Gentleman (1982), Jeff Bridges and Rachel Ward in Against All Odds (1984), Harrison Ford and Kelly McGillis in Witness (1985), Ellen Barkin and Dennis Quaid in The Big Easy (1986), Mimi Rogers and Tom Berenger in Someone to Watch Over Me (1987), Mel Gibson, Michelle Pfeiffer (and Kurt Russell) in Tequila Sunrise (1988), Pfeiffer and the Bridges brothers in The Fabulous Baker Boys (1989), even Patrick Swayze and Demi Moore in Ghost (1990).

It didn’t always work (check out Al Pacino with Barkin in Sea of Love (1989), hoo boy, Barkin looks like she’s kissing a hobo),  Still, these were romantic and racy mainstream films that presented non-comedic stories but relied on the strong and compelling mutual sexual attraction of their leads.  We just grew out of these kinds of movies and “sexual chemistry” became quaint, jettisoned for talky, quippy, modern rom-com dreck.  1992’s overt Basic Instinct, where Sharon Stone had to give a glimpse of her hoo-ha (trademarked) to keep folks interested was the end, and now, we are in mannequins-in-bondage land (Fifty Shades of Dull).

But I digress.  No Way Out is awful, but also, a little sad.

The movie gets an automatic half point deduction because it was so intense and gripping that I had to leave the room a few times and scream to my family, “What’s happening now?”  I have to assume there were some problems with the picture during those moments.  Otherwise, John Krasinski’s sophomore effort as a director is taut, assured (you feel he really had a vision as to almost every scene), and at the right times, edge-of-your-seat terrifying.  It is also bolstered by wonderful performances that are necessarily non-verbal.  Krasinski is moving as a beleaguered father trying to protect his family, and Emily Blunt’s travails as she communicates them are almost too much to bear.

The only thing you need to know about the plot is that the monsters can hear EVERYTHING!

I stumbled on this Saturday, and it took some time to figure out what I’d gotten myself into.  Roman J. Israel (Denzel Washington) is a relic from the civil rights era, still fighting the good legal fight with his more prestigious mentor in a musty LA office.  While the mentor is the dazzle, Israel is the quirky brain.  But soon, like Bumpy in American Gangster, the mentor dies, and Israel is set adrift.  The firm is closed and now, Israel has to fend for himself, eventually taking a job with a criminal defense mill helmed by a slick former student of the mentor (Colin Farrell) whose firm has gone all corporate and Johnnie Cochran.  Will Roman kowtow to “the man” and play the game or will his deep conviction to the plight of the downtrodden and forgotten snap him back from the pit of doom?

That’s essentially the story, and it is told in a clunky and plodding manner.  Writer-director Dan Gilroy tries to give it some zest, but the only vigor comes from the fact that Israel is clearly on the spectrum (this must be a thing now; even Ben Affleck has donned the autism robes).  This allows Washington to mug and riff, which he did well enough to earn a Best Actor nod, but his work is in the service of an at-best pedestrian and at-worst mind-numbingly boring story.  Gilroy’s last effort – Nightcrawler – was a sharp, edgy commentary on tabloid culture.  It’s a shame he followed it up with this schmaltzy morality tale.