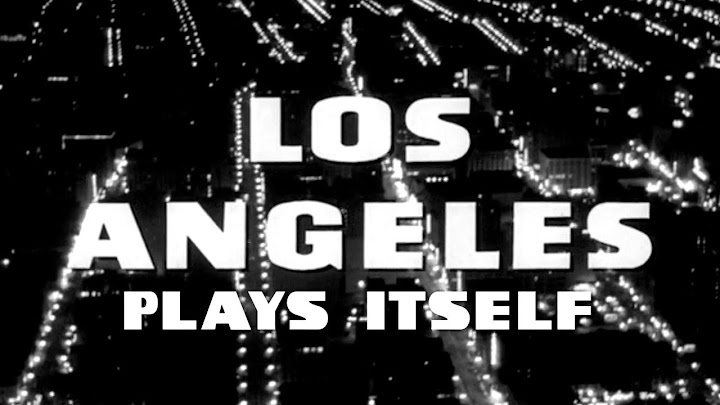 Currently available on Netflix streaming, this almost 3 hour documentary essay presents as both art exhibit and graduate course (it is written and narrated by the sleepy-voiced Thom Anderson, a filmmaker and film theory and history teacher at the California Institute of the Arts).  Los Angeles Plays Itself is textually interesting, the visuals of the city’s depiction in film are always entertaining, and accompanied by Anderson’s incisive narration, often illuminating.

Anderson can also be very funny, in a dry “this is Carlton, your doorman” way. On a scene from Michael Mann’s Heat:

[In Heat, Neil McCauley (Robert DeNiro) is briefing two members of his gang. He tells them, “Saint Vincent Thomas Bridge, that’s escape route number one.“]  Vincent Thomas was San Pedro’s representative in the state assembly for many years, but he hasn’t been canonized yet, not even in Pedro.

And on the perpetual destruction of LA in the movies:

Mike Davis has claimed that Hollywood takes a special pleasure in destroying Los Angeles, a guilty pleasure shared by most of its audience. The entire world seems to be rooting for Los Angeles to slide into the Pacific or be swallowed by the San Andreas fault. …In Independence Day, who could identify with the caricatured mob…dancing in idiot ecstasy…to greet the extraterrestrials? There is a comic undertone of ‘good riddance’ when kooks like these are vaporized by the earth’s latest ill-mannered guests.  But to me the casual sacrifice of Paris in Armageddon seems even crasser. Are the French being singled out for punishment because they admire Jerry Lewis too much? Or because they have resisted Hollywood’s cultural imperialism too fervently?

Of course, if you let an academic talk long enough without interruption or query, he’ll eventually meander into overstatement and grandiosity, and as Anderson moves from LA’s history, architecture, sprawl and patterns in film to politics, race and class, we get poetic broadsides, against the cops and the modern Noah Crosses and skyscrapers. This is all part of the condescension of most any “true” city dweller who presumes to know the authentic heart that beats in his city, and for the most part, that’s part of Anderson’s charm.  Anderson has a grievance, as he concedes at the outset:  That’s another presumption of the movies: that everyone in Los Angeles is part of their industry or wants to be. Actually, only one in forty residents of Los Angeles County works in the entertainment industry. But the rest of us simply don’t exist.  We might wonder if the movies have ever really depicted Los Angeles.

But doleful mouthfuls like “White America had declared a crisis of the black family as a cover for its campaign of incremental genocide against its expendable ex-slave population, rendered superfluous by immigrant labor power, so black film-makers responded by emphasizing families and children” are waiting at the end, so you have been warned.

Though it limps a little at the finish, I really dug this movie, and it is a must-see for any film buff.

J.C. Shandor wrote and directed my favorite film of 2011, Margin Call, a verbose, intricate “what if?” financial thriller set before the crash of 2008. Last year, Shandor made the critically acclaimed All is Lost, a tale of survival on the sea starring Robert Redford and featuring a script of a mere 31 pages (it is now on Netflix streaming but I’ve neglected to see it). If there was any doubt, Shandor’s third film cements that he has no interest in doing the same thing again.  A Most Violent Year is the anti-crime picture, a meticulous thriller set in the suburbs of 1981 New York City revolving around the intricacies and corruption of . . . the home heating oil business. Oscar Isaac and Jessica Chastain are a married couple working to expand their reach in the business, in the face of union troubles, a prosecutor’s investigation, the hijacking of their trucks and the intimidation of their sales force. Isaac, an immigrant, is resolute in combating these obstacles in a legal and above-board manner. Chastain is the daughter of a mob boss, and her fealty to the straight-and-narrow is less stringent. As the screws turn, you think you can see where this is going.  You’re wrong.

Chandor’s medium cool meditation emphasizes Isaac’s passion, ethics, and larger vision and while the stakes are small in the scheme of things, to Isaac, they are everything, and Shandor effectively invests the audience in his struggle without infusing the narrative with the expected fleshy, pulpy, satisfying retributive violence. I’ll admit:  bloodletting is what I wanted and expected and as the tension mounted, Chandor’s resolution felt unsatisfying. In that way, Chandor transforms the genre.

This is an ingenious, unique movie.  Chandor’s feel for 80s New York is sharp, his pacing is tight and he never veers far from the heart of the picture, the unswerving devotion of Isaac and Chastain to their business and to each other. Their performances are riveting; they feel like a married couple who melded passionately but never addressed longstanding disputes in their view of the world.  Like a real married couple.

One of the best of the year.

John Michael McDonagh’s The Guard was one of the best films of 2011, a sharp, wry, talky culture clash comedy that pitted straight laced federal agent Don Cheadle against the blustering, Irish provocateur Brendan Gleeson. In Calvary, Gleeson is again McDonagh’s center as a Catholic priest tending to an Irish seaside community. The film opens in the confessional, with a man telling Gleeson that in 7 days time, he will meet him on the beach and murder him. What follows is a depiction of Gleeson’s role in a town in transition culturally, economically and spiritually, where Gleeson’s faith is tested time and time again. McDonagh has crafted a compelling parable, deep with import.  It also stands as one of the few films that conveys the centrality of religion in a particular modern locale (The Apostle comes to mind but that was set in the American South, which is in many ways archaic). Yet, as much as the film is steeped in the story of the New Testament, it is thoroughly modern, as Gleeson is mocked, goaded and pitied by a flock that considers him a joke from days gone past yet are drawn to his authority and the promise of understanding and guidance.

This sounds very heavy and yet, McDonagh’s strength is his keen grasp of the unique Irish patter, with its unyielding thrust and parry.  The dialogue is razor sharp and bitingly funny, and when these characters get past the language that insulates them, an almost national dialogue, revelation of their pain is truly moving.  One of the best of the year, and while the crimes of the Academy are many, the omission of Gleeson and the screenplay for nominations is, keeping in a religious vein, an abomination.

Downton Abbey is a hugely successful period British soap opera that is anachronistic, predictable and overwrought.  The Imitation Game is Downton Abbey for the movies.  Alan Turing (Benedict Cumberbatch) is the Sheldon Cooper of World War II; brilliant, odd, effeminate and humor impaired, and he is tasked with cracking the Nazi Enigma code.  He does so, with the help of Keira Knightley and Matthew Goode and an actor from Downton Abbey, all the while struggling with his sexuality, his anti-social personality and a race against the clock.

There is not much in the film that isn’t expected.  After alienating his colleagues, Turing wins them over.  After being quirky, we are charmed and in his corner.  After connecting with a teen friend in boarding school in flashback, the boy dies. After that boy tells Turing, “Sometimes it is the people who no one imagines anything of who do the things that no one can imagine,” that line is delivered again and then again.  After the team cracks the code, they immediately pinpoint the location of every ship in the Atlantic and deduce that a passenger ship is in danger, but they can’t save it, because it would give their achievement away to the Nazis, and then, it turns out the brother of a team member is on the ship in danger, and he tells Turing he can’t be God.

Cumberbatch is good in parts, but it is a mannered, tic-laden performance, one that eschews every one of the relationships he is supposed to develop.  You don’t believe he has bonded with his co-workers and you sure don’t believe he and Knightley have established an intellectual kinship.  Curiously, Turing’s homosexuality is successfully used against him – when he discovers a Soviet spy in his midst, the spy threatens to reveal Turing’s sexual orientation and Turing clams up.  And how did the spy come to learn Turing was gay?  When Turing became engaged to Knightley to keep her on the team, after treating his sexuality as a state secret, he rather comfortably tells the spy his personal business.

Another problem is the insistence on establishing a suffering symbol for homosexuality, a dramatic decision that has plagued African American characters in historical films for eons.  The real Turing was pretty openly gay with his co-workers, even coming on to several male colleagues.  Now that is interesting.  But we need a noble victim here so, let’s just forget the stubborn and inconvenient facts.  It is one thing to amp up Turing’s role in creating the device that breaks the German code.  It’s another to change his very essence to deliver us our important lesson.

But its British, it’s topical, it has sweep and it is a tragedy anchored by Cumberbatch’s Oscar bait tears and quivers.  So, it is heralded.  But when it is not being ridiculous and ahistorical, it is pedestrian.