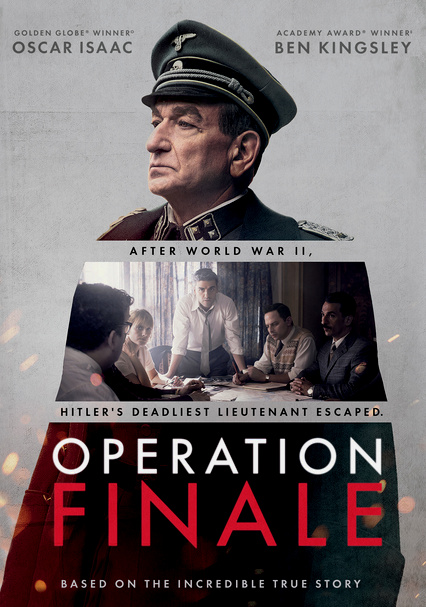 Chris Weitz’s (About a Boy) largely faithful recreation of the capture of Adolph Eichmann is sober, competent and a little dull.  Peter Malkin (Oscar Isaac) is the focus of a several member Israeli infiltration team sent to grab Eichmann (Ben Kingsley) from Argentina and covertly spirit him away to Israel for trial.  All well and good, even if the film drags until they actually get to South America.  When on the ground, the film picks up, but there really isn’t much to the operation.  They jump Eichmann at night as he gets off his bus and keep him in a safe house, where his removal is delayed for several days, thus allowing Isaac (whose sister, niece and nephew were killed in the Holocaust, which we see in flashback) to engage the monster in an effort to get his signed consent to extradition.  The best part of the picture is Kingsley, who conveys Eichmann’s urbane precision and amorality in equal parts.  But there isn’t much to the exchange.   Isaac seems too much the professional to be flustered by the engagement, and Weitz is too cautious in the opportunity.

Perhaps sensing the film’s lethargy, Weitz adds a fictional Argo-like race to the airport, but it lacks any real punch.

A perfectly inoffensive picture.  Wait until it’s free and you have little in the way of alternative entertainment options

I had the misfortune of catching half of Cate Blanchett’s fun, sumptuous and engaging Elizabeth recently. The comparison makes this turdfest even more unbearable.

Sairose Ronan is fiery, wild eyed, and indignant as Mary Queen of Scots, perpetually perturbed and always speechifying.  Margot Robbie is her nemesis Elizabeth, but Robbie appears way out her depth. She acts like she’s in a high school production.

The performances, however, are the least of this picture’s woes.

The script is charmless and dull. Intrigue has no deftness. People just argue briefly, declare and then act.

The lone battle scene is so badly handled, you don’t know what the hell is happening.  It presents like kids playing war in the backyard.

The script is also obsessed with its feminist hot take, particularly with Mary, who is put-upon by a man’s world and way ahead of the curve.  Mary’s ladies in waiting are like The View, and Mary is forced to rape her homosexual husband (very unconvincingly) to have an heir.  John Knox inveighs against Mary, not because she was a Catholic, but because she was a damnable woman who enjoyed sins of the flesh (he calls her “whore of Babylon”, “strumpet” and “harlot” in one speech).  We even get to see Mary menstruate.

Elizabeth gets in on the act as well, hectoring her male advisors with “we could do well worse” than Mary as queen and bemoaning Mary’s fate with “How cruel men are.”

Indeed, when they eventually meet, there is no enmity. Just a couple of gals dishing on inequity, the glass ceiling and the unfairness of it all.

Until Mary gets wild-eyed and entitled and the girl power card loses its oomph.

Then, bitches get stitches and Mary is locked away, eventually to be beheaded.

The writer secures revenge in the post-script, however, lording Mary’s fertility over Elizabeth’s mere 44 year reign.

Modernity infects this dog in many other ways. When Mary’s gay attendant stops just short of breaking into a show tune, and pulls himself up short, the modern and reformed Catholic soothes him with a “be whoever you wish to be with us” (when he sleeps with Mary’s husband, kneels before her and begs for forgiveness, she soothes him again – “you have not betrayed your nature”).  Before battle, she assures one of her Protestant soldiers that should they die, they will all see the same God.

Best line. “I will not become a lady Henry VIII dispensing husbands as he did wives.“

A massive bag of crap. And no fun!

Finally got a chance to see this. It’s bad. Green Book bad.

It starts as a mildly amusing, slick sit-comish comedy structured on a ridiculous premise – in the 1970s, black Colorado cop Ron Stallworth (John David Washington) calls the KKK to join up, and they are eager to have him, so after first contact, he has to use his white partner (Adam Driver) for face-to-face meetings, which creates unnecessarily close shaves.

Why not have Driver simply make the calls and handle the meets?

The answer is – wacky hijinx!  And there’s plenty of that.

Eventually, the funny gets less funny and the picture lapses into an absurdist procedural punctuated by overt, earnest philosophical discussions that would make kids in an Oberlin coffee house roll their eyes.

Perhaps sensing the lightness of the fare and his own elapsing clock, Lee goes heavy at the end, utilizing actual footage from the Nazi rally in Charlottesville.  It’s like appending pictures of James Meredith’s shooting at the end of a poignant Different Strokes.

It’s a cheap ploy that seeks to elevate the zany caper that preceded it to serious statement.  Worse, as pointed out by Boots Riley, director of the infinitely better Sorry to Bother You, Lee’s film is based on a true story, and a less convenient aspect of that story might be that the real Stallworth was infiltrating black organizations to their detriment.

You gotta’ give it to Lee, though. He knows his audience and he oversauced this goose good. Heck, he almost pulled it off.

This is a confounding but worthwhile picture.  It tries to be many things.   A heist caper.  A feminist tract.  A racial observance.  A cynical statement on corruption.  A twist flick.  It fails to be complete in any of these pursuits, but that doesn’t make it unenjoyable, just vexing.

Steve McQueen (Shame, Twelve Years of Slave) brings his meditative touch to Chicago, where the widows of a group of professional criminals (think the gang in Heat; in fact, the widows pick up a driver on the fly just like in that flick) must pick up where their flawed husbands have left off.  Their pursuit is intertwined with romantic, political, and familial entanglements.

There’s a lot here, but eventually, the film falters because it takes on way too much.  This is a mini-series sized saga, and given how well McQueen does with various scenes, you’re eventually frustrated at the truncated resolutions.  Still, the performances are stellar.  In particular, Viola Davis, even saddled with an ever-present and ridiculous West Highland White Terrier, is penetrating, and as villains go, Daniel Kaluuya (Get Out) is a top ten. In post-WWII Poland, a pianist and an ingénue he has selected for the national cultural ensemble fall in love.  He escapes through Berlin on a concert tour, but she is hesitant, and they are separated.  They see each other every few years, and eventually, they are reunited in Paris, free.  But they cannot make a go of it, she retreats back to Poland, and in what is supposed to be a grand gesture of everlasting devotion, he admits his sin against the state, returns to his native country and does 15 years hard labor, which, coupled with torture, destroys his fingers.

I suppose this was supposed to connect as a moody, timeless, passionate yet doomed romance.  But the two leads, who alternately smolder and pout, are so childish and impetuous, it’s hard to gin up much sympathy.  Indeed, when she makes it to Paris, they bicker like children, she constantly kvetching about his prior lover and Western ambition, he inexplicably distant (in fact, he often looks as if he knows he made a very big mistake in working so hard to be with her but can’t bring himself to admit it).

Neither character acts in a manner showing any deference to their good fortune.  These aren’t lovers separated by culture or prior marriages or obligation, but rather, an iron curtain where, to be on the wrong side of it, you lose your freedom and you can get your delicate pianist fingers mangled by 15 years of forced labor and torture.  And they surmount that curtain!  So, when they chuck it for seemingly pedestrian reasons, and he insists on his grotesque punishment, you don’t care.  Well, maybe you will.  The movie is very well regarded.  But I didn’t.

On the plus side, the movie is beautifully shot and blessedly short at under an hour-and-a-half.

I assume this is based on a video game. If not, it has the haphazard feel of one and the banal dialogue sounds like what video characters might say. There are also times when you wish you could hit reset given its hackneyed aspects (stock Italian goomba rifleman, erudite and aristocratic Nazi officer heavy,  soldier revealing post-war plans right before . . .)

But this story of a WWII paratroop unit dropping behind enemy lines only to find that the Nazis are – can you believe it? – engaged in medical experimentation to create an uber soldier is competent with a fun B movie feel. And occasionally, it is even a little scary.  Entirely worth the $1.87 Redbox rental.

One other positive note. The lead and the tough guy sergeant are African-American, which, given that integration of the troops didn’t occur until after the war, is an anomaly. However, since race has absolutely nothing to do with this middling popcorn flick, it’s a welcome development. Sure, there are no black Nazis, but all in good time. One of the few movies I can recommend you see IN the theater.  I didn’t hear a murmur.  Not one popcorn chomp, not one whisper.   We did, however, all scream at the right places.

I can’t speak much to the plot, as it would just give it away, so I’ll leave it at the following.  The film is spine-tingling, brilliantly scored, and Peele never makes a wrong step.  His ken for arresting and creepy imagery is stunning, the script is clever, and the twists are well-founded and earned.

Afterwards, you will find that it does not hold up to logical scrutiny yet that failure doesn’t make a damn bit of difference to your enjoyment of the picture.