After Paddington 2, it made sense to watch Jumanji 2 (next up – Lars Von Trier’s Nymphomaniac: Vol. II).   We loved it.  It moves like a freight train, and the gimmick of having the modern teens stuck in detention (ala’ The Breakfast Club) stumble on an old 90s video game, which literally sucks them in, is handled expertly.  Better, when they come out on the other side, they are in the adult form of their video game characters (one poor, vain teen queen is encased in the plump body of Jack Black, while the football star is relegated to the diminutive Kevin Hart).   The juxtapositions are hilarious; in particular, the cranky and unnerved Hart, who can make you laugh in spite of yourself in the lamest of vehicles.  One minor complaint – the video game world was dazzling, but the villain (Bobby Cannavale) was wasted.  A more robust baddie was in order. 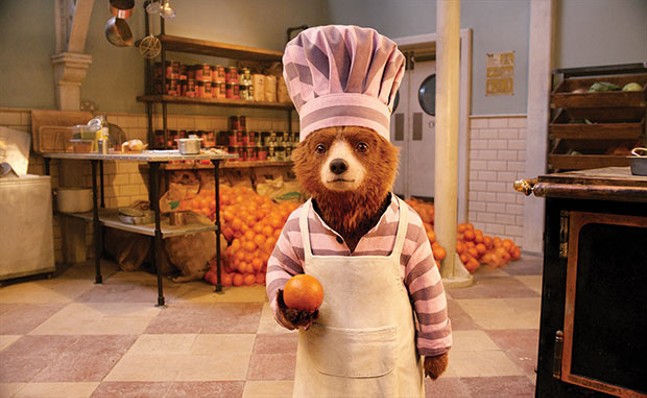 Every bit as fun, entertaining and sweet as Paddington (seen but not reviewed). Director Paul King has infused the sequel with a Wes Anderson-esque quirkiness, clever detail, ingenious set designs, and playful cinematography, ala’ The Grand Budapest Hotel. Hugh Grant has aged nicely into a grand villain, and he fronts an inspired song-and-dance number to close the picture.

The orgasmic acclaim is a little much, but this is mostly good fun. A little Lion King, a little James Bond (they have their own Q, who shows off the technological gizmos, and a CIA operative Felix Lighter) and even a Millennium Falcon. There’s also some simplistic politics thrown in. Should Wakanda, a magical African kingdom powered by vibranium (a kick ass metal that provides strength, power and wealth) stay hidden in its borders or should it come out from shadows and take on the world struggle for the black and dispossessed?

I dunno. Who cares? Let’s cut the high-minded chatter about what happens when vibranium becomes plentiful and get to clever quips and fisticuffs.

As with most of these movies, it is weakened by the need to have comic book characters in silly suits address weighty matters (guess what? Vibranium is going to revitalize Oakland!) but as these things go, it’s a solid popcorn flick, and the action is first rate.

Just as Dunkirk was an ode to English pluck and a representation of the viscerally brutal and arbitrary nature of war, The King’s Choice serves the dual purpose of a national homage to Norway’s resistance in the face of a Nazi invasion and the strain placed on the powerful and the ordinary in such circumstances.  Norway’s King Haakon VII, is a sweet, doting grandfather who is constitutionally deferential to a democratic body that is crumbling under the weight of events.  He must bolster the government while staving off the more muscular, ambitious desires of his son, which carry with them an implicit criticism of his father as weak.  Indeed, as the king suffers from a bad back, we often see him in a fetal position on the floor or a bed.  Meanwhile, the German attaché, who is juxtaposed favorably with the uncompromising Wermacht, desperately pleads with the king to accede to Hitler’s demand for submission, knowing that failure to do so totally will mean the deaths of many innocents.   The tension is palpable, the pace gripping, and the quiet moments – especially the scenes showing the effect on the families – poignant.

I caution you.  I’m a sucker for westerns, especially modern ones, because they are so few and far between. The last good one was Open Range, and that was 15 years ago (I don’t consider the brilliant The Assassination of Jesse James by the Coward Robert Ford to be a traditional western, but you have to go back to 2007 for that one, and the Coen Brothers True Grit from 2011 is a remake, so, it is also exempted).

I also concede that this film is a bit heavy on allegory and peace pipe mumbo-jumbo.  That said, I loved it.  Set in 1892, Christian Bale plays an embittered officer tasked with transporting an Indian chief (Wes Studi) and his family from New Mexico to Montana.  It is a laborious task made even more so to Bale because a decade earlier, Studi massacred Bale’s men, much as Bale massacred many an Indian.  During their trek, they come across a brutalized, in-shock Rosamund Pike, a frontier woman who lost everything to marauding Apache.  Along with a dozen other supporting characters, the group makes it way through the forbidding and harsh land, and God help me for writing these words, but in the doing, they come to an understanding about each other and their past deeds.  Written and directed by hit-or-miss Scott Cooper (Black Mass, Crazy Heart, Out of the Furnace), this is a sprawling, expertly shot picture with a heavy dose of melancholy and a serene, mystical side that evokes Terence Malick (in a good way).  Several scenes were deeply affecting, and the acting is committed and mature.

I couldn’t get enough and will gladly suffer the slings and arrows of my position, because you damned cynics ruin everything.