This is a consistently disturbing and terrifying film, one that explores myth, religion, and the dread of isolation in the cruel and unforgiving setting of pre-colonial America.  Writer-director Robert Eggers is a master of the creepy visual as he tracks a Puritan family, cast out from their community and into the wilderness on the strength of religious conviction. It is there, alone, that the bonds of their faith and family and the limits of their sanity are tested by the supernatural.

This film has a lot in common with The Babadook, invoking both curse, madness and the susceptibility of children, and like that film, there are moments of absolute horror that do not rely on a drop of shed blood.  If there is a weakness (and it is by no means universal, just one of personal taste), it is the simplicity of the threat. In The Witch, the threat is omnipotent and unexplained. It has no backstory, no articulated lore, and no vulnerability. As such, as assured as it presents, there is a decided lack of drama. We quickly learn these folks don’t stand a chance, and while their fate and story is loads more interesting than standard meat grinder fare, I just don’t have much of an interest when the deck is so stacked, no matter how skilled the effort.  Nonetheless, this movie has one of the spookiest feels of any I’ve seen. 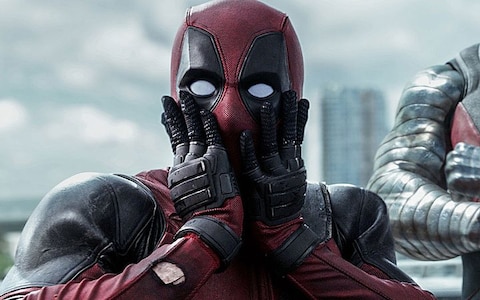 It’s hard to decide on what was more enjoyable about Deadpool. There’s the ingenious flash-forward, flashback in story, which keeps the action fresh. There is also an intelligent self-referential trick; as Deadpool (Ryan Reynolds) is dragged to the estate of the X-Men, he asks “ “So, McAvoy or Stewart?”.  The back-and-forth between Reynolds – our hero, though he insists he is not – and the other characters is sharp and profane. The utter lack of seriousness, save for a very few poignant moments that are immediately deflated by the screenwriting equivalent of fart noises – is also a joy (indeed, Reynolds actually farts as he walks by his roommate, who, unbelievably, is a geriatric blind woman). There’s the 106 minute running time, juxtaposed nicely with the bloated, Shoah-like length of the interminable Avenger movies, which keeps things humming.

But I guess my favorite part is when Reynolds meets his love interest (Morena Baccarin) and we are educated as to the depth of their ardor via a montage of their incredibly kinky sex life, which incorporates days of commemoration. The image of Reynolds bound and on all fours as Baccarin prepares to “celebrate” International Women’s Day with him is hilarious, made more so by the image of parents quickly hustling their children out of a theater they lazily thought was showing children’s fare 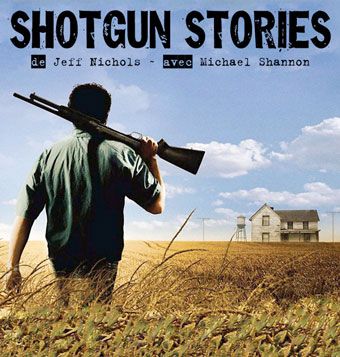 Anyone who watches movies knows that some of the greatest offerings of falsity come in the package of authenticity, and this is never more so than when a filmmaker takes his shot at rural or back home America. The pitfalls are many, and invariably, films about the small town succumb to oppressive nostalgia (Hoosiers), salt-of-the-earth worship (Promised Land), the presence of an impossibly attractive lead as he or she slums (Mel Gibson in The River, George Clooney in The Perfect Storm), cutesy “we’re jes’ folks” condescension (Passion Fish), amped up mythology (Out of the Furnace) or just plain old moronic messages, like money doesn’t buy happiness or home is where the heart is or safe sex is the best sex.

There are exceptions (Billy Bob Thornton’s Sling Blade, Carl Franklin’s One False Move, Debra Granik’s Winter’s Bone), but they are rare and they are not current. In Mud, Take Shelter, and this film, a story about two modern Arkansas families drawn into a violent confrontation upon the death of their shared patriarch, writer-director Jeff Nichols cements that he can translate the patterns, pace and feel of the small town like no other. The actors portraying the family members are natural and unburdened by archetype, and the town itself is not presented to you as a metaphor or cautionary tale, just a town.

What Nichols does with actors and setting he achieves with tone. The families are seemingly in as safe a place as you can be, but when their animosities surface, their very environment becomes foreboding, and the pressure mounts accordingly. As the calamities befall them, there are no revelations or Hollywood speeches or screenwriter dot-connecting. Nichols is content to let you be the judge of what it all means.

This was Echol’s first film, and that may explain its brevity (about 90 minutes). The result is some backstory that is a tad rushed, but nonetheless, this is a gripping, thoughtful picture.

Screenwriter Diablo Cody made a big splash with the clever Juno, and showed real growth with the acid Young Adult. But that was a while ago.  Now she has penned this trite stinker, in the mold of so many dramadies about the travails of rich families as they negotiate the perilous path of monied suburbia. In this case, the major disturbance comes in the form of Ricki, a talentless front woman for a cover band who has come home to her estranged family to chew with her mouth open and say dirty words.

No. Streep is just terrible, whether slumming as the hip cast-off or leading the lamest cover band ever. She’s in-authentically grungy and gratuitously down-to-earth and when she visits her estranged family, led by the kind ex-husband (Kevin Kline), it is cringe-inducing, not because of the fish-out-of-water stuff (this is the kind of movie where the denizens of the tony enclave practically say, “Well, I never!”), but because there’s not a word of it that feels real.  Kline has, of course, remarried a protective earth mother type who raised the abandoned children while Ricki honed her craft covering Tom Petty.  Ricki also abandoned a a nice son about to get married to the most stuck-up bitch imaginable; a fragile daughter who has had a breakdown because her marriage of three seconds failed (you’d think she’d been a captive of Boko Haram, so extreme is her distress); and a son straight out of gay central casting (he is furious because Ricki called his gayness a phase and voted for W . . . twice!)

All of which would be humdrum but bearable twaddle save for the fact that Ricki and her shit band play about 7 numbers in this picture, including a version of Wooly Boolie so bad we could have won the war on terror years ago had it been utilized at Guantanamo.  Worse, Ricki’s version of Springsteen’s My Love Will Not Let You Down starts more like a Quarterflash tune and ends with your head in a bucket.

After August: Osage County and this, I am not saying Streep is at that Pacino point, where she thinks she can just fart in a bottle and call it potpourri. But she’s on notice.

Rick Springfield, who plays the lead guitarist for the Flash and Ricki’s love interest, deserved better.