Mr. Rogers should have been right in my wheelhouse when I was a kid. I was around six or seven when he went national. However, public television was not a staple in my Catholic household. The only glimpse I got was when I went to the home of my Jewish friend, whose parents included PBS in their progressivism, but by the time we became pals, Fred Rogers was there to be mocked, not appreciated.

It’s a shame, because watching this documentary and Rogers interacting with little kids, you can see both the wonder in their eyes and the deep connections he developed. There is a vignette with a little boy who is explaining to Mr. Rogers’ most famous hand puppet, Daniel, about how his cat was run over by a car. The boy is being stoic but when Daniel becomes emotional, you can see the boy become protective as well. His concern transfers to the puppet and in the transfer, he creates a beautiful and healthy way to express his grief.  It’s a stunning exchange.

Genuinely sweet, good and largely uncomplicated public figures are a difficult find. This documentary does a great job of telling the story of one such man.  It has faults – it is thin on his background, it over emphasizes some cable noise about his effect on children (i.e., made them soft), and it succumbs a little to the “these dark times” trope – but these are nits. Highly recommended as both entertainment and moral tonic. This rom-com starts off balky, rights itself into a traditional flow, gets deliciously weird (catty women do some frightful things to rivals in Singapore) and then, eventually, wins you over.  Not in a “what a splendid and unexpected surprise!” way, but rather, in a “I am no worse off than I was 2 hours ago and I’ve certainly spent my time in less valuable pursuits” way.  The film’s additional bonus is as a travelogue.  I would now like to visit Singapore and if I were crazy rich, I’d really like to make the trek. 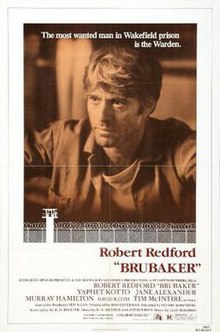 I just finished Blood in the Water, an exhaustive history on the Attica uprising and its aftermath.  And lo and behold, Brubaker hits the cable movie rotation.  I remember it being overly preachy but engaging, but times have changed, and now, Stuart Rosenberg’s (Cool Hand Luke) film seems rather reserved and even-handed.  It isn’t but that’s how it feels today.

No matter the prevalence of a particular bent, the picture juggles its message and a gripping mystery within the prison adeptly, the feel is right, and it is never dull.

Henry Brubaker (Robert Redford) is a reform warden incarcerated incognito as an inmate in the Arkansas prison he will soon be running.  From the outset, he witnesses abuses by trustees (prisoners given the right and authority to be armed and act as corrections officers) that include brutal beatings, theft of food for resale, and extortion for basic necessities.  As for the conduct of the governmental officials of the prison, it is no better.  The doctor charges for services, the cooks charge for edible food, and the warden hires out men to local businesses for free.  Rape is rampant and problem inmates (including a young Morgan Freeman) are shut in dark, airless cells in a separate area of the prison.

Brubaker soon reveals himself, and in his attempts to change the prison, he is met with stiff resistance from the local community, the trustees, and soon, even the governor who appointed him.  His liberality is thrown in his face by the conservative elements, who see him in league with the prisoners, while the liberal faction sees only the damage done by his upending the system and his refusal to take half a loaf.

There are problems.  Redford is plagued by his good looks.  His embedding into the prison population without notice is a stretch.  He is also so self-righteous and literal, it grates, and the end is just piling on. Also, a potential sexual chemistry between Burbaker and assistant to the governor Jane Alexander is needlessly left unexplored.  And Roger Ebert, per usual, hits the nail on the head:  “The movie (refuses) to permit its characters more human dimensions. We want to know these people better, but the screenplay throws up a wall; they act according to the ideological positions assigned to them in the screenplay, and that’s that. … Half of Redford’s speeches could have come out of newspaper editorials, but we never find out much about him.”