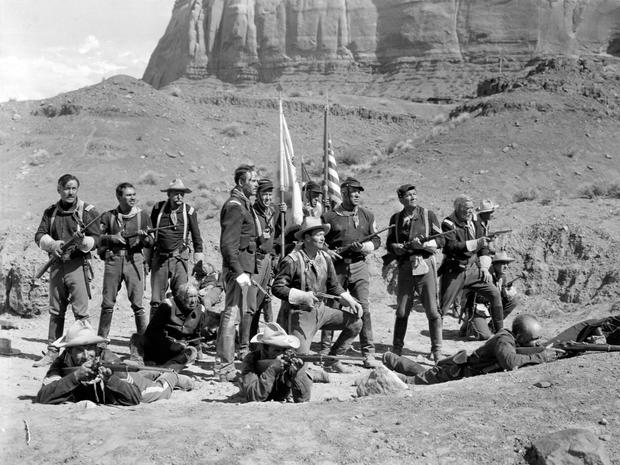 John Ford’s western, an extremely loose re-imagining of the Custer massacre, surprises in numerous ways.  The film has a heady sense of humor – the hard-boozing Irish of The Quiet Man are present, but not quite so cartoonishly so.  It again reveals that John Wayne was quite underrated as a dramatic actor.  But it is most unique in its melding of patriotic lore and bitter cynicism, ultimately concluding that the fraudulent propagation of patriotic heroism is at a minimum a necessary evil and perhaps even a critical component of the national ethos.  What matters, ultimately, is the myth.

It is also, of course, beautiful in its use of Monument Valley.

My first thought for a first sentence of this review was “I don’t get it.” But that was at about 1/4 of the way through this sparse (budget – $100,000) and ingenious film that unfolds at its own leisurely pace, with every scene building upon the last.

The story is simple. Casey Affleck and Rooney Mara are a young couple on the verge of a move from their home when Affleck dies in a tragic traffic accident. Rather than ascend to the hereafter, his ghost returns to the home. And that is where we find him. For all ages. Mind you, he is not in a CGI, wispy and elegiac form. He is wearing a sheet with two holes cut out for eyes.  And his rambler (not a creepy Victorian) is the place he haunts, throughout eternity.

The film is at first uncomfortable.  It’s hard to adjust to the low-tech representation of ghostdom, and writer director David Lowery’s penchant for lassitude tests, but soon, through the patience of the director and the stoic and sad nature of Affleck’s choice, you invest totally in his journey.

This is an art film. As such, it takes chances other movies would not dream of. Not all of its choices hit the mark, but by the end, it proves to be thoughtful, accomplished, and really intriguing.

I am stil not sure that I get it. But have been thinking and talking about it ever since watching. That alone merits high marks.

Much like all of the rest of the DC/Marvel dreck, although this one is plagued by an even higher degree of contempt for the audience. The script is lazy and moronic. The look is cheap (Gal Godot reminded me of Harry Hamlin in Clash of the Titans). The slo-mo seems positively retro. The soundtrack is oppressive and unyielding.  The villain is obvious.  The homily (“only love can truly save the world”) overly earnest even for this kind of popcorn flick.  The Battle Royale finale a snore.

This is a movie you can’t even really fold laundry to.  Though Godot ain’t hard on the eyes and she and Captain Kirk have a few cute moments together, she’s at heart a dolt, wide eyed and stupid or, when she kind of gets it, petulant and stupid.

And the proof is in the historical pudding. After World War I ends, which coincides with the end of the film, she makes it her mission in voiceover to spread peace in our time.  We all know how that turned out.