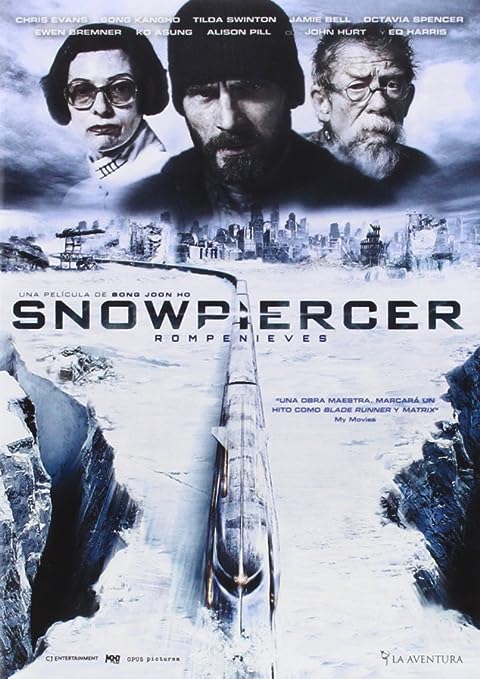 Mankind is threatened by global warming, and in an effort to turn the tide, introduces a cooling agent into the atmosphere. A deep freeze results and the only survivors live on a train run on perpetual motion that circles the earth, said train having been developed by a prescient bazillionaire (Ed Harris). The poor, led by Chris Evans (Captain America), eat mushy protein bars in the last car, while the rich are pampered with sushi, drugs, saunas and opulence in the front. Evans leads a revolt and the proletariat move from car to car to get control.

This is high concept, ambitious dystopia, but it is also unsubtle, mostly ridiculous, high concept dystopia, inadequately explained (a perpetual motion train?) and saddled with an unwieldy end (Harris shows up, like the wizard behind the curtain, to explain all). I’m all for ambition, but this is several trestles too far.

The film also contains a simplistic Have v. Have Nots political theme, which probably accounts for its appearance on so many top ten lists. For an example of the film tickling the right funny bone, one need go no further than The San Francisco Chronicle’s Mick LaSalle and his juvenile conclusion: “It’s a film that, in its own peculiar way, forces viewers to question their values and ask themselves how much they’re willing to sacrifice for a functioning society, and how much is too much.” If it takes the likes of Snowpiercer to force LaSalle to question his own values, I’m surprised he didn’t join a monastery after The Hunger Games.

The picture is also unwisely reliant on Evans, who lacks the gravitas of a dark, brooding action hero and the chops to handle the big, tortured soliloquy at the end. We’re supposed to be dazzled, but like most products of graphic novels, it’s a slick, empty endeavor with a few interesting parts. Tilda Swinton is also very funny as a bucktoothed toady for Harris.