I was underwhelmed by Denis Villeneuve’s Arrival, mainly because of its dreary look and my own intellectual limitations.  Thankfully, Blade Runner 2049 is visually dazzling with a plot that is intricate but not byzantine.  Ryan Gosling is a Blade Runner (i.e., a hunter of older model replicants – think Westworld – who have a tendency to go haywire).  Unlike Harrison Ford in the original film, Gosling is unequivocally a replicant himself, but in the process of putting down a replicant fugitive, he becomes ensnared in a larger, metaphysical mystery that melds corporate malfeasance, potential civil war, and Genesis.  It could have been ridiculously heavy, but Gosling manages a wry yet naïve countenance and the bloviations of the corporate would-be god (Jared Leto) are both few and leavened by Gosling’s running battle with a particularly fierce replicant (Sylvia Hoeks).

The film’s look is stunning and the real star is Gosling’s navigation of the eye-popping world around him.  Other than Robin Wright being horribly miscast as Gosling’s supervisor (her insistence on being ballsy is over the top, and her Sam Spade delivery is clunky) and the picture running a little long, this was well worth the time. 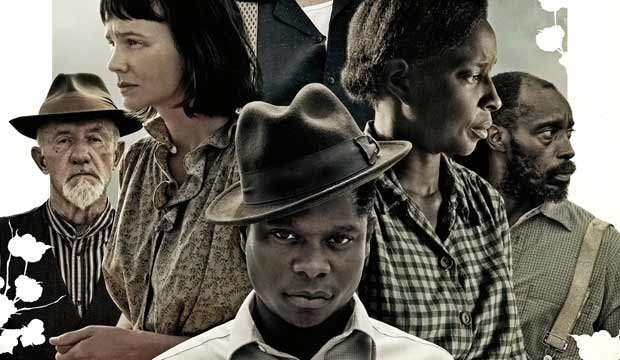 A beautiful picture, depicting the lassitude and lethality of post World War II Mississippi as two families, one white and one black, are challenged and near-consumed by the stifling climate and punishing soil, as well as the psychological toll of war and the rotting cancer of racism.  It is rightly nominated for Best Cinematography and Adapted Screenplay, and Mary J. Blige stands-in as supporting actress nominee for any number of deserving performances (especially Rob Morgan as a stoic, beleaguered tenant farmer).  There is a stretch where the budding friendship of haunted war vets Garrett Hedlund and Jason Mitchell skirts cliche’, but other than that, the film is rich with authenticity and heart.   It is currently available to stream on Netflix. 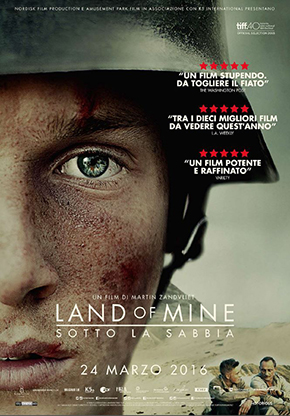 During WWII, the Germans occupying Denmark laid 2.2 million mines on its coast in anticipation of an Allied invasion. The Danes employed their former occupiers to clean up those mines, the subject matter of this harrowing and haunting film. We follow a group of very young, very scared German soldiers who are given mine-clearing training and then a quadrant containing 45,000 mines. If they clear them at a certain rate, they will be allowed to go home in three months.

The process is nerve wracking. Mind you, these boys have instruction and some support, unlike the Iranian children during the Iran-Iraq war who were simply sent into the mine fields to clear by suicide in some glorious sacrifice. But the toll, both physical and psychological, is brutal, especially when inflicted on ones so young. They are homesick, hungry (their care was not paramount) and under the leadership of an embittered Danish sergeant who is fighting his own demons but is also humanized by their plight.

This is a beautiful picture, enhanced by touching, sensitive performances. There is talk every year of creating an Oscar for an ensemble, and this cast would be a deserving nominee. The film, however, is not for the faint of heart. 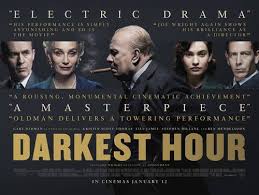 Joe Wright’s (Atonement) film is repetitive, didactic, simplistic, and eventually, in one of the most cringe-inducing scenes you’ll ever see, when Winston Churchill finds himself on the Underground getting his back stiffened by “the people”, patently ridiculous.  The only thing missing on that subway car is Tiny Tim exclaiming “God Bless Us, everyone” and thereby spurring Churchill to reject appeasement and declare that England would “never surrender.”

It is also unnecessarily arty (a bombing scene is a particular sin, evoking Michael Bay’s Pearl Harbor, a film you really don’t want to ape in any manner) and annoyingly expositive – we learn about Churchill’s background via random members of the House of Commons speaking to each other as if they – or we – are dunces (“and his father died of syphillis!”  Harumph!)

Churchill was a lion,  But he was also a snake.  Now, one could argue that his lies were of necessity.  But here, they are simply ignored or recast as tactical blunders.  Don’t lie to the people, King George VI counsels.  Be straightforward, and they shall corner you in a subway car and show their true mettle.

And, apparently, it was Churchill and Churchill alone who deduced that you could send civilian boats to pick up stranded men at Dunkirk.  He is the oracle.  Everyone else on his war council is a dimwit, a ninny or a quitter.

Ostensibly, the real reason to see this movie is Gary Oldman‘s performance, and it is not bad. But it is not great. Oldman gets the fussiness, the hidden mirth, and the anger, but his stabs at insecurity come off as petulance, and on balance, the performance feels more like a mimicry.  In fact, recently, John Lithgow (The Crown) turned in much more nuanced and effective turn as Churchill.  Indeed, the best performance in this film does not belong to Oldman, but to Ben Mendelsohn as King George, who is subtly moved.