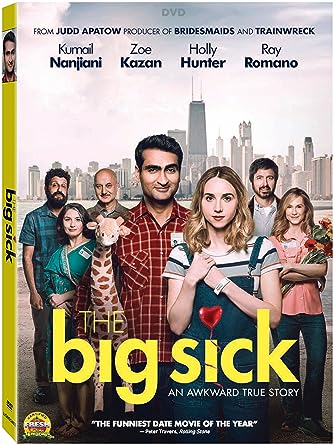 A charming, surprisingly thoughtful film, anchored by co- writer Kumail Nanjiani’s (Silicon Valley) substantial performance and deft support by Holly Hunter and Ray Romano.  Nanjiani is a stand-up comic (a staple in a Judd Apatow produced film) and Uber driver who falls for student Zoe Kazan, a gentle heckler at one of his shows.  The hitch is his family and his cultural background – he is a Muslim from Pakistan and while he is decidedly “American” in most respects, his parents will not countenance his marrying a non-Muslim and per custom, are in the process of arranging his nuptials.  To that end, he is enlisted for ritual family dinners with prospective suitable brides, none of whom do it for him.  But he is both dishonest and weak, keeping his cultural constraints secret from Kazan while feigning devotion to his parents even as he blows off prayers and tantalizes them with the possibility of law school.  When Kazan confronts him, he wilts and does not choose her.

And then she gets sick.  So sick, she is placed in a medically-induced coma, necessitating his attention, not only towards her but her parents (Hunter and Romano).  The experience forces him to reevaluate his station, his choices and his own cowardice.

This could have been played mainly for laughs and it would have worked very well.  And the film is very funny,  Nanjiani has an understated humor, at once self-deprecating and subtle.  Some of the best moments are when he makes a joke to people who are a little slow on the uptake, only to immediately apologize at the moment the jest dawns on them.  Nanjiani is, naturally, surrounded by comedians who relentlessly attack each other, also providing solid humor.

But what elevates the film is Nanjiani’s impressive expression in dealing not only with the culture tug of his family, but with the depth of emotion at the near-death of who he comes to realize is the woman he loves.  And in his support for her parents (Hunter and Romano), from whom he gets both caution and encouragement, he grows.  The movie works on multiple levels, you invest in these people, and the result is a really tight, funny, bittersweet picture.

It has been an atrocious year for films, but this would stand out in a solid one.

A movie only an Irishman could love. I don’t know what to say. John Ford’s classic starts off as a cartoon, with Irish folk so spritely and impish you half expect a pot o’ gold around every corner. They are there to welcome Yank John Wayne, who comes to the land of his birth and immediately falls for spinster Maureen O’Hara. I expect she was supposed to play as a fiery and obstinate redhead, but really, she’s the first truly bipolar heroine in American film. At no point is she satisfied, and poor Wayne has to subjugate himself again and again for this loon. To the point he is labeled a spineless coward, primarily due to O’Hara’s chemical imbalance.

Wayne’s reticence is borne of a dark secret (the flashback provides the few memorable, even iconic, images in Ford’s film). And Wayne is surprisingly good in the role. But he’s stuck in a film with so many bizarre caricatures, it seems especially cruel to see him work.

There’s humor here, and some sweetness, but the picture doesn’t travel well, unlike other films that seem out of time, like Gone With the Wind. There’s also a strange mix of lush photography of the countryside and just awful soundstage footage too clumsy for its year (1952).

The lesson is also a little peculiar.  Let your harridan of a psychotic wife drive you to violence, with an entire drunk and backward town offering a stick to beat her with, and she’ll finally have sex with you.  Actually, that’s really the best part of the picture, and for all its faults, what makes it kitschy fun.

Good to see a young Jack MacGowran, the director Burke Dennings (the one who got his head twisted completely around) in The Exorcist.

There’s nothing particularly bad about this biopic of Chuck Wepner, the Bayonne Bleeder, the fighter who went the distance with Ali (mainly as a human punching bag) and was the inspiration for Rocky.  Liev Schreiber gets to trot out his semi-lovable, Joisy-accented galoot, and at times, you actually feel bad for the guy, a palooka with a heart of tin who is given a taste of the big time and handles it poorly (drugs, booze, women, and perhaps most distressingly, disco).  But you don’t ever really develop an interest in him.

You’ve seen it all before, and even with the exertions of Schreiber, a pasty and portly Jim Gaffigan (as Chuck’s loyal and unctuous sidekick) and Elizabeth Moss (his suffering wife), you end up asking “to what end?”  Or, in Joisy parlance, “What the fuck?”

The film also makes a huge mistake by trying to recapture the Ali-Wepner fight, which feels as if it was held in a community rec center. In John Wick, the Mob tried to take the man’s car and they killed his puppy.  In response, he killed all of them.  Hundreds.  Everywhere.  It was gloriously simplistic and fun.

This time around, we delve deeper into John Wick’s criminal world, where he has a debt to pay pursuant to a criminal code, and there is an entire bad guy underworld and ruling structure, with politics, and apparently, 75% of the folks walking the streets of New York City are potential assassins.  More explication makes for a lesser film, and with the shootouts essentially the same as in the first picture, it’s pretty blah.

Spoiler – the new dog does not die.