I’m not a big fan of the super hero flicks, and now that they are mixing and matching and packaging ad infinitum, I’m even less enamored.   For the most part, they are CGI Dramamine, and in the wrong hands (like those of Zach Snyder), they add a seriousness that is self-parody (the preview for the new Superman v. Batman, or whatever the heck it is called, is so dour you almost brighten up when Wonder Woman is inexplicably thrown in the mix).

And yes, they are going to pigeonhole Ant Man (Paul Rudd) into the franchise, which will mean we have another wiseacre to compete with Tony Stark, but still . . . I liked this movie very much.  Rudd is charming as an ex-Robin Hood con who is used by Michael Douglas to get miniaturizing technology out of the hands of his evil protégé (Corey Stoll) and the CGI for the transformation is both nifty and ladled out sparingly.  Ant Man seems a nice fella’, as if you dropped an Apatow character into a super hero guise, and he’s aided by a hilarious trio of bumblers, one of whom (Michael Pena) made me laugh out loud repeatedly.

Key Largo melded with Quentin Tarantino’s bravura scenes in Inglorious Basterds and his crackling dialogue in Reservoir Dogs. I had the pleasure of watching this picture on Christmas Day in 70mm at the AFI Silver Theater, complete with an overture and an intermission. The latter occurred after 1:46 minutes, and I remarked to my son that the film was flying by, particularly so because almost all that had occurred was conversation. Obviously, a Tarantino film cannot subsist on talk alone, but when the violence occurs, it is supported by the rich, if broad, characters developed beforehand (unlike in Django, where the carnage at the end felt like an indulgent spasm, revealing an insecurity at what came before).

It’s one of the best films of the year and it’s also one that should not be in any way spoiled by a plot summary or any other commentary that could lessen the fun. Accordingly, I’ll make my review brief and non-specific in the form of a few notes.

First, Spike Lee once disrespected Samuel L. Jackson when the latter was a working character actor and the former was the auteur du jour. Lee is also made apoplectic by Tarantino, who wades into race with a daring and incisiveness that obliterates Lee’s rote and easy observations. As it turns out, Lee and Jackson have achieved a rapprochement (they do commercials together), but any rift between Lee and Tarantino is settled by Jackson (“Spike saying, ‘I’m not going to see Django because it’s an insult to my ancestors’? It’s fine if you think that, but then you have nothing else to say about the movie, period, because you don’t know if Quentin insulted your ancestors or not,”).

Also, Jackson should receive an honorary Oscar for this alone:

This is an ensemble picture but it’s Jackson’s picture (though costars Walter Goggins and Jennifer Jason Leigh give him a run for his money).

Second, Tarantino masterfully blends genre, history, comic books and violence, but sometimes, it is to the detriment of his narrative. Not here. When the necessary resolution explodes, it’s almost a disappointment because you know there will be less talk. Tarantino’s script is razor-sharp, hilarious, suspenseful and a brilliant mix of modern pop culture and historical grievance.  It’s really something.

Third, I generally do not read any reviews or commentary about a film before seeing it or writing my own review, and I did not do so here. But I presume there is the same hullabaloo about Tarantino’s liberal use of racial and sexist insults. All I can say is that he uses them beautifully, like David Milch in Deadwood.  This is how you would expect low, dangerous comic book characters who steal and murder to parlay.  Any objection is likely coming from the same humorless prigs or their progeny who objected to the hyenas in The Lion King because they were villains voiced by minorities. In fact, in creating a movie depicting a roomful of lethal people who must sleep with one eye open as they brave a blizzard and their own treachery, opprobrium aside, it’s one of the most egalitarian rooms you’ll find in film. 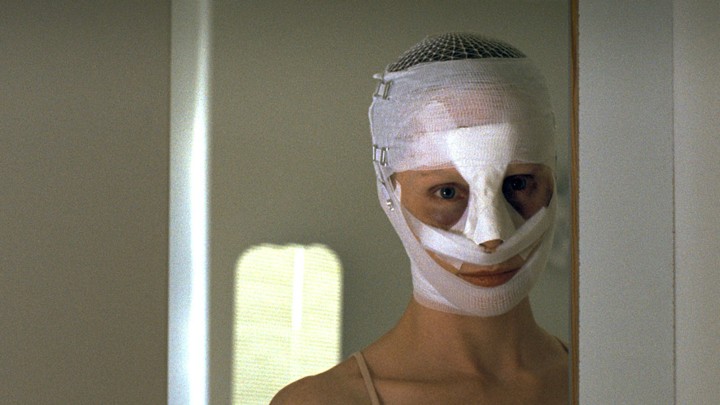 A psychological thriller from Austria that pits two young boys against their mother, who has been in a car accident, undergone facial reconstruction surgery and who, as time passes and the bandages come off, they suspect is not their mother. The critics hailed this (82% on rottentomatoes.com) as rising above genre, both terrifying and revolutionary, but the audience, who scored it at 67%, is closer to the mark.  The film starts intriguing (if a bit obvious in it’s The Sixth Sense twist), but soon becomes monotonous, artily sterile, and then simply cruel. I turned it off. J.J. Abrams pulled off a neat trick with this picture. First, he purged from our filmic consciousness the abominations that were George Lucas’ middle three Star Wars films, which were bloated, antiseptic stories populated by green screen zombies and seemingly produced for the sole purpose of reinvigorating the merchandising arm of his global empire. For more on this, see Red Letter Media’s brutal takedown of those films and The People versus George Lucas.

Second, Abrams eased into it, essentially hewing to the first film in both style and story. There is nothing new or even particularly daring here, but Abrams is wisely more interested in establishing his bona fides and recreating the feel of the first three films. This one is a mix of action, fun and nostalgia, self-referential but not so self-referential as to be lazy.

Third, he strongly established four different new characters – three of whom have true motivations that emanate from a backstory – for the franchise to rely upon going forth.

It’s not perfect. Some of the self-reference is a little haggard, and the plot at the end is a little thin, pat and hurried. Yet, Abrams needed to exorcise the franchise of its demon menace, Lucas the bloodless toy purveyor, and he has done so in a movie that can reconnect new viewers to the wonders of the first pictures.

A smart, kinetic re-imagining of Risky Business, except instead of Joel from the tony suburbs of Chicago, we get Malcolm, a geek from the decidedly tougher “the Bottoms” of Inglewood.  A lot of good laughs and a few inspired set pieces.  Unfortunately, it shoots itself in the foot at the end with some clunky, preachy Spike Lee homily.  Shame.