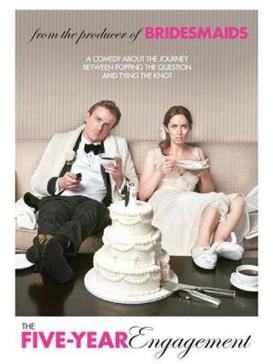 Another from the factory of producer Judd Apatow, director Nicholas Stoller co-wrote the script with star Jason Segal, which tells the story of Segal and Emily Blunt, he a San Francisco chef and she a would-be psychology professor at the University of Michigan.  They fall in love but then endure the long stretch of pre-marriage, with its attendant insecurity, doldrums and misgiving.  While the stretch can be a little rough on the viewer, Blunt is charming and as he did in Forgetting Sarah Marshall and Get Him to the Greek, Stoller wisely populates the story with supporting characters who offer varied, funny bits.  In particular, David Paymer and Mimi Kennedy shine as Segal’s blunt, atypically private parents.  Alison Brie (Trudy from Mad Men) is also strong as Blunt’s happily married sister and she and Blunt pull off a hilarious conversation/confrontation in front of her young children in the guises of Elmo and The Cookie Monster, thus masking the seriousness of their subject matter.

Still, there are glaring problems.  Stoller and Segal over-rely on the easy laughs of adults using dirty words (though nothing quite so bad as Apatow’s embarrassing This is 40); the image of Segal’s bare ass or failing and/or harried while humping really isn’t all that funny; the replacement mates when Segal and Blunt break up (Rhys Ifans and Dakota Johnson) are gruesome, easy marks; and there’s nothing really new here.

There is also the problem of Segal, who is perhaps the only actor who makes Paul Rudd seem manly.  From his awful sitcom How I Met Your Mother to just about every film in which he’s carried the load, Segal is a tiny variation on the same persona – aw shucks, hapless, sweet and prone to self-pitying outburst.  Summed up, a huge pussy.  I’m happy to defer, but in a romantic comedy, he’s a natural best friend, not the lead.