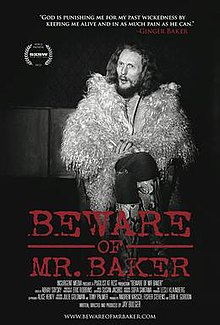 Back in the Eisenhower administration, I was in a band blessed by a distinctive lead singer, a virtuoso guitarist and a very strong rock drummer.  I was pretty much in awe of their playing (I was a passable rhythm guitarist converted to a fledgling bass player and mainly tried to stay out of the band’s way). Watching Beware Mr. Baker, a documentary on the life of legendary Cream and Blind Faith drummer Ginger Baker, his musicianship (a maniacal blend of jazz and African styles), reminded me of the fact that a crapload of really gifted players are drawn into pop music.  Of those players, I’m most fascinated by the work of drummers, be it Keith Moon’s “lead” drumming or Ringo’s Starr’s apt choices on a few cuts (Rain, Tomorrow Never Knows), perhaps because it is an instrument I cannot even comprehend.  Who the hell can move their arms and legs at the same time to a musical purpose?  It’s witchcraft, I tell you.

Baker was shockingly adept and seemingly original (I say “seemingly” because my knowledge of the history of drumming is lacking). Yet, as the documentary points out, he was also mercurial, peripatetic and volatile, which is a nice way of saying he was a drug-addled dick who plagued his bandmates (Eric Clapton is interviewed and while kind to Baker, seems almost like a hostage survivor), tortured his family, pissed away any goodwill he may have engendered and split town when things got hairy.

Now, he is a cantankerous, chain-smoking recluse in South Africa, whinging on about the injustices delivered to him, or just generally shitting on all but a few folks he respects. This may have been a recipe for boredom, but documentarian Jay Bulger intersperses Baker’s snide reminiscing with impressive footage of his playing days, interviews with contemporaries and family that are refreshingly non-hagiographic, and inventive animation.

The result is an engaging, occasionally illuminating documentary about a talented asshole.