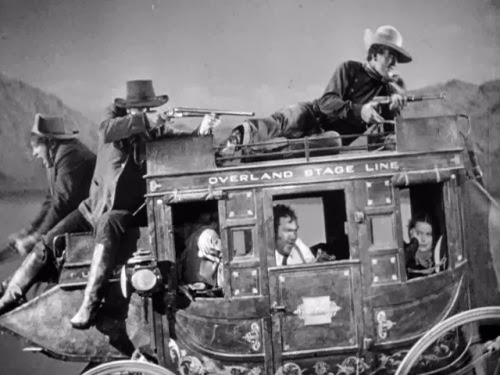 John Ford’s classic alternates between deft commentary on social strata, hypocrisy and manners and, for its time, jaw-dropping action (the chase scene at the end almost certainly had to result in many a broken bone, if not worse).  Orson Welles studied the picture obsessively prior to Citizen Kane, and the film’s influence is evident in everything from Eastwood’s westerns to Tarantino’s The Hateful Eight.  As Eastwood correctly observed, “There’s something about the way he approached his subject that broke down clichés of the era.”

In the vein of these dimwitted times, you can leave it to Tarantino to lodge the standard p.c. indictment:  “I hate him [Ford]. Forget about faceless Indians he killed like zombies. It really is people like that that kept alive this idea of Anglo-Saxon humanity compared to everybody else’s humanity—and the idea that that’s hogwash is a very new idea in relative terms.”  Regardless, as is evident in Tarantino’s last film, which expertly apes and updates Ford’s socially diverse discourse, Ford’s influence is inescapable even if Tarantino believes himself immune to his charms.  An excellent rebuttal to Tarantino’s juvenile approximation of Ford can be found here and properly notes:

His films don’t live apart from the shifts in American culture and the demands of the film industry, but in dialogue with them. Do those films provide the models of racial enlightenment that we expect today? Of course they don’t. On the other hand, they are far more nuanced and sophisticated in this regard than the streamlined commentaries that one reads about them, behaviorally, historically, and cinematically speaking, and the seeds of Ulzana’s Raid and Dead Man are already growing in Fort Apache and The Searchers. Is Ford’s vision “paternalistic?” I suppose it is (and that includes The Sun Shines Bright and Sergeant Rutledge), but the culture was paternalistic, and holding an artist working in a popular form to the standards of an activist or a statesman and condemning him for failing to escape the boundaries of his own moment is a fool’s game. Maybe it’s time to stop searching for moral perfection in artists.

The film also made John Wayne a star, and Ford’s introductory shot of the actor could hardly have done less:

Methinks the fix was in.