Linking two famous hauntings, Amityville and Enfield (both almost certainly hoaxes, which, I suppose outs me as someone who accepts the possibility of “authentic” paranormal phenomena), director James Wan sends his un-dynamic duo (Patrick Wilson and Vera Farmiga) from Long Island to London, where they lend their assistance to a beleaguered family of five whose council house appears to be spooked by its former occupant.  There are a few frights, but not much beyond that, the failures attributable to a number of factors.  First, Wilson and Farmiga are boring, just dull as dishwater.  I get it.  They are religious.  But religious people need not be saltines.

Second, big houses with sprawling grounds are scary; crappy British public housing, not so much.

Third, Wan over-relies on the same gimmick – camera pans away, nothing there, then back, all is well, then back, okay, then . . . 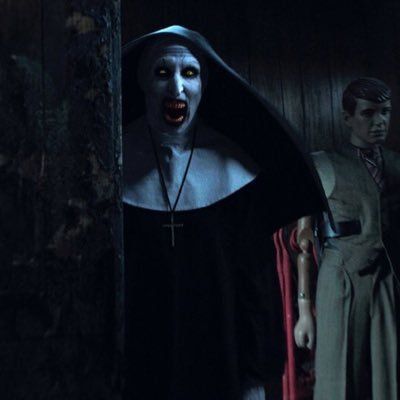 Whammo!  Look who’s in the mirror.  It gets old.

Finally, the whole story is the fact that the creepy nun wants to get Farmiga, much like the demon wanted to get Father Merrin in The Exorcist.  Only, Merrin v. Satan was a mere subplot of what was an otherwise compelling, intricate and literate horror film, which The Conjuring 2 is decidedly not.