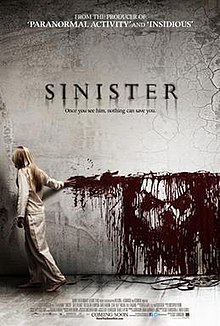 Ethan Hawke is a true crime writer on the down slope who moves his wife and kids into the house where the grisly murder of another family occurred. His m.o. is to solve the case or to at least highlight the screw-ups of the authorities.

The funny thing is, he doesn’t tell his wife or two children he’s moved them into a house where grisly murders occurred, he finds Super 8 film of the grisly murders and the grisly murders of numerous other families from other areas throughout the country in the attic, his teen son is flipping out from night terrors, his lights don’t work, there are horrible thumps in the attic (and a snake and a scorpion), he sees a creepy dude in the yard who he has also seen in the Super 8 films, and his kids start drawing gruesome images of dead children. And his wife sleeps the sleep of a thousand nights, even though, during the day, she’s understandably nervous about this whole situation.

And he stays because “This could be my In Cold Blood.”

So his wife stays.