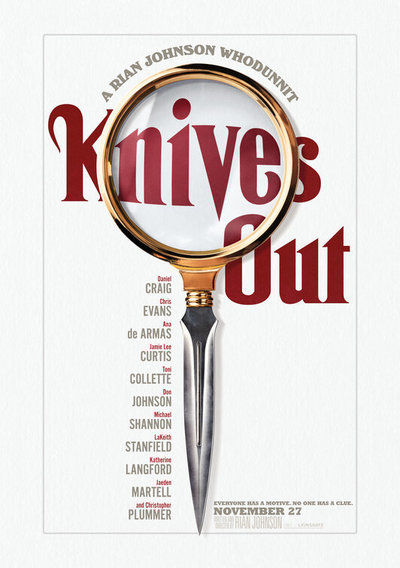 Rian Johnson’s (Brick, Looper) modern update to the Deathtrap/Murder on the Orient Express-style whodunnit is clever, tight, witty and consistently engaging. The wealthy family of a famous mystery author (Christopher Plummer) is suspected of having offed him at a get-together in his ornate mansion (a cop observes “Look around. The guy basically lives in a clue board!”) and the investigation centers on his nurse, Marta (Ana de Armas), who is alternatively claimed and condescended to by the clan. The investigation is a wellspring of black humor, biting cynicism and hilarious family drama. Everyone (and everyone seems to be in this) is excellent, particularly Daniel Craig as a Southern drawling Hercule Poirot.

Two nits. First, in a mystery, having a character who is congenitally incapable of lying is an egregious cheat. If it weren’t for Johnson’s ingenious plotting, I’d have been more put off. Second, the politics are for the most part deft but also a little clunky. The family fighting about Trump was funny and authentic, with its hypocritical righty who digs Trump and treats Marta as a maid and his lefty cliche’ amping to 11 and invoking the Nazis. It was also even-handed – a leftie social justice warrior who has befriended Marta ends up being a true Judas . Still, Johnson rhetorically over-dunks on the lot of the Richie Riches at the end, which is the only misstep in what is otherwise a seamless, lively flick.