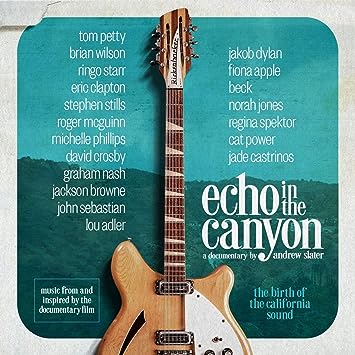 Jakob Dylan’s enterprise (re-recording a lot of Laurel Canyon, jangly folk rock and putting on a show) is the heart of this documentary, which also features Dylan quietly listening to the usual suspects (David Crosby, Tom Petty, Roger McGuinn, Jackson Brown and many more) go on about what made the Laurel Canyon sound and scene what they were.  For the most part, the interviewees seem to have no idea, but man, they sure dug the vibe.

The documentary is pretty pedestrian, Dylan being a particularly inapt choice for interviewer (there are times he looks like he fell asleep, which is hard to do in front of the Gary Busey-esque Stephen Stills).  The narrative is also a bit of a mess – is this about the sound, the place or why The Byrds broke up?  is it the film of a tribute record/show?  or is it about Dylan’s seemingly excellent directional skills as he drives around LA?

The picture follows no line very long and when “old friends” like Michelle Phillips or Brian Wilson drop by the studio as Dylan works on their tunes, well . . . “awkward” would be understatement.  Wilson’s snippet in particular underscores the problem.  Hailed as a master of a golden age, when he comes in to see how Dylan is faring with one of his tunes, the only usable footage is Wilson asking what key they’re playing the song in.  Hoo boy.

It’s as if the musicians have been asked so often about “their time” that the answers are rote. All the pulp has been squeezed out, they realize it, and so they compensate with content-less emotion.  Such is their banality, the film uses up footage of Dylan driving in LA, or we get the obligatory Petty and Dylan walking into a guitar store, or Dylan strolling into a record store and appearing like a man looking for directions.

And the movie is only 1 hour 22 minutes.

The best parts are the snippets of song for the show, which includes Beck, Fiona Apple, Nora Jones, Jade Castrinos, Cat Power and others.   But, to be even more of a curmudgeon, Dylan is such a musical barbiturate, even those numbers feel a little lackluster.