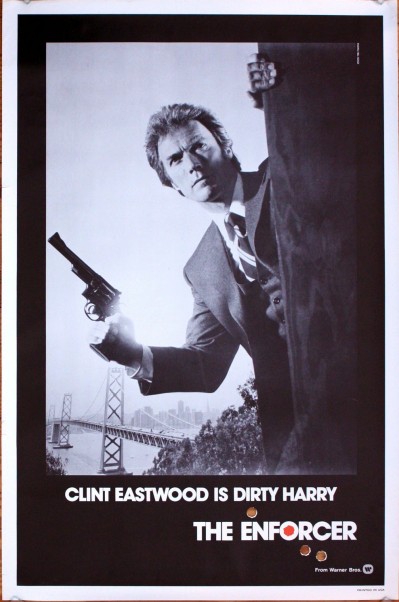 Dirty Harry was a film so conservative, Paul Newman gave it a hard pass. But not without cementing the franchise by recommending Clint Eastwood for the role.  Eastwood plays the iconic Inspector Harry Callahan, and when San Francisco is terrorized by a serial killer (the Scorpio, rather than the Zodiac), it turns to Harry to save its ass. Unfortunately, every time Harry gets near the crazed nut, some liberal judge or pencil-pushing, ass-covering bureaucrat is obstructing his simple moral code and his massive .44 Magnum. Finally, he just has to go rogue and takes matters into his own hands. After he finishes the job, a disgusted Callahan tosses his badge in the bay.

Except, the movie was wildly popular.

It took the talents of a young John Milius to pull Callahan back from the ranks of the fascist in the follow-up, Magnum Force, where the bad guys are actually cops, an execution squad working at the behest of seeming pencil-pushing, ass-covering bureaucrat Hal Holbrook (in fact, Holbrook is the mastermind of a new form of vigilante justice). In the second film, Callahan is still our cynical, equal opportunity bigot who loathes the politics, regulations and political correctness of the city. But he can’t quite get on board with a Star Chamber. As much as  he detests the system, he figures it’s better than any alternative.

In The Enforcer, Callahan is back to his conservative roots, and stuck with an affirmative action partner, Tyne Daley. In Dirty Harry, his partner was Hispanic and in Magnum Force, African-American, but one never got the impression they hadn’t earned their stripes. Daley, on the other hand, is introduced as someone who has never made a collar (felony or misdemeanor), a quota baby straight out of . . . . grrrrrr . . . . Personnel.

Worse, an officious woman from the mayor’s office – likely, straight out of a precursor to the Office of Diversity and Inclusion – is present at Daley’s interview, one conducted by Callahan.  Daley fails, miserably, but the fix is in and she’s given the gig.

After she importunes Harry to give her a chance, things start off rocky. On her first day, she almost gets her head blown off by a hand-held rocket launcher, almost loses her lunch during an autopsy, and unwittingly runs around half of San Francisco with a bomb. But she’s got moxie. And with a band of the most brutal hippies having just kidnapped the feckless “pay them!” mayor, you’re going to need Tyne Daley’s moxie.

The Enforcer is more of the same but smartly done. You get the satisfying back-and-forth between Harry and the government weasels:

Capt. McKay: That’s it Callahan, you just got yourself a sixty-day suspension.

Capt. McKay: A hundred-and-eighty, and give me your star.

Capt. Mckay: What did you say?!

Harry: I said stick it in your ass!

You also get a lot of gunplay, a jazzy Jerry Fielding score, some inspired action sequences, and numerous chases through eclectic, weird and grimy 1970s San Francisco. But it is Daley as the earnest sidekick who just wants to earn her stripes who elevates the picture.  She’s winning, sympathetic and you root for her, the first time a character from the corrupt system makes you say, “C’mon, Harry.  Lighten up.” When she meets Harry’s standards (she blows two of the bad guys away and to one, she says “You laugh at me mister, and I’ll shoot you where you stand”), you cheer.

Because how could you not?  Punk.