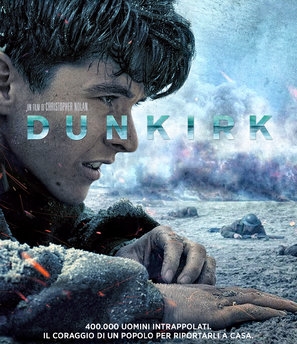 A beautifully rendered film that both personalizes the cruelty and haphazard nature of war and presents it in the broader context of national sacrifice and pride. Christopher Nolan depicts the evacuation of Dunkirk from the vantage point of the officers responsible for the endeavor, the foot soldiers desperate to get away, and the military and civilian rescuers who, with the Nazis having inexplicably failed to press their advantage after Blitzkrieg and the collapse of France, race to Dunkirk to save upwards of 400,00 stranded troops.  Nolan’s approach is tonally somber, underscored by composer Hans Zimmer’s minimalist, ticking clock soundtrack.  Nolan also alters sequence, which gives the audience a feeling in line with that of the troops: a constant need to get its bearings.

This one won’t win any acting awards, simply because it is so sparse, but almost everyone is very good (in particular, Kenneth Branagh and Mark Rylance), and former teen heartthrob One Directioner Harry Styles is perfectly fine.

The lack of dialogue does not denote an action film.  Nolan’s picture is visually arresting but never exploitative or flashy.  Thankfully, Dunkirk eschews the war film standard of late – brutal, unremitting and loaded with gore, always looking to surpass the hellish set pieces of Saving Private Ryan (Hacksaw Ridge,  The Pacific, Fury). Instead, it is meditative and as such, a great deal more effective.