For the life of me, I cannot understand why Kenneth Branagh re-made this film, at least in the way he chose to do so.  As Hercule Poirot, he is excellent.  Quirky, brilliant, and droll.  But this picturesque, stagey fluff needs an entire carload of scene chewers, not just the one, and though Michele Pfeiffer tries gamely, everyone else appears, like the victim, to have been dosed with barbital.  Johnny Depp plays it low and gravelly, Penelope Cruz low and gravely.  Willem Dafoe is dour. Derek Jacobi is restrained.

And I don’t know anyone else on the train, save for Josh Gad: 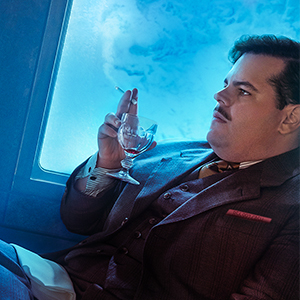 And he has no business being on this train.