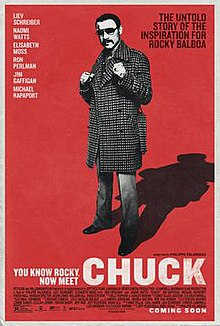 There’s nothing particularly bad about this biopic of Chuck Wepner, the Bayonne Bleeder, the fighter who went the distance with Ali (mainly as a human punching bag) and was the inspiration for Rocky.  Liev Schreiber gets to trot out his semi-lovable, Joisy-accented galoot, and at times, you actually feel bad for the guy, a palooka with a heart of tin who is given a taste of the big time and handles it poorly (drugs, booze, women, and perhaps most distressingly, disco).  But you don’t ever really develop an interest in him.

You’ve seen it all before, and even with the exertions of Schreiber, a pasty and portly Jim Gaffigan (as Chuck’s loyal and unctuous sidekick) and Elizabeth Moss (his suffering wife), you end up asking “to what end?”  Or, in Joisy parlance, “What the fuck?”

The film also makes a huge mistake by trying to recapture the Ali-Wepner fight, which feels as if it was held in a community rec center.