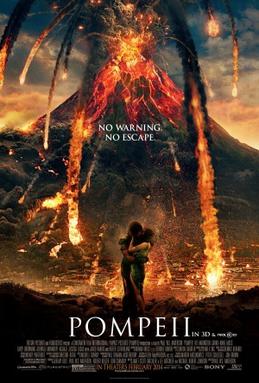 It was on.  Nothing else was on.  An old recipe–

*2 tsps. hunk from “The Wall” on Game of Thrones (Kit Harrington)

*1 lb. Gladiator, including a contest in the arena based on a Roman conquest where our hero commands an ahistorical result, an African gladiator who becomes our protagonist’s friend and soul mate, a knock-off of the ghostly Hans Zimmer score, and a baddie (Kiefer Sutherland) who wants to put his thumb down but must turn it up lest he lose the favor of the people

*1/2 lb. Titanic, including star-crossed lovers from different backgrounds, looming disaster, a chase through the beleaguered city as time runs short, and laugh-out-loud funny anachronistic dialogue, mostly from our Kate Winsletian heroine, Emily Browning (“Men killing each other for amusement is not a sport”; “Senator, you have mistaken me for the kind of woman who drapes herself across your lap in Rome“; “He made me feel… safe. “

It cost $100 million to make and made $110 million at the box office worldwide, so Pompeii II: The Reaping has probably been avoided.