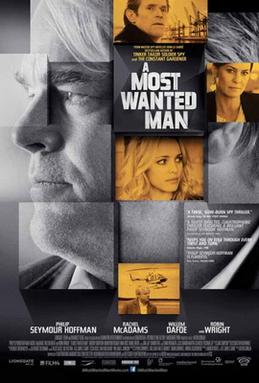 On the plus side, this moody, meditative adaptation of a John le Carre’ novel is intelligent yet explicable (unlike the rushed and byzantine Tinker Tailor Soldier Spy) and anchored by one of the greatest actors of a generation, the late Phillip Seymour Hoffman. On the downside, while it is compelling in parts, it is hurt by a weak Rachel McAdams performance and an inapt one by Robin Wright.  More problematic, the grim resolution seems a cop-out, an easy resolution that makes the viewer wonder what the hell this was all about.

Hoffman is a German intelligence officer who leads an anti-terror unit in Hamburg. Like Jessica Chastain in Zero Dark Thirty, he is haunted by an intelligence failure from his past. He is tracking two terror suspects, one a potential bomber and the other a funder, when he formulates the idea of baiting the latter with the former. McAdams plays a lefty lawyer representing the suspected bomber and, as usual, she is thin, distractingly glamorous and, when asked to buckle under the weight of seclusion and interrogation, inept and unconvincing. Wright, as a CIA counterpart to Hoffman, is merely odd. She’s much too high brow, playing a minor variation of her character in Netflix’s excellent House of Cards, fine for a First Lady but not so much for a spook.

Hoffman, however, is stellar, whether keeping a frightened mole from turning, managing his younger team, or lecturing McAdams on the naivete of her politics. He is supported ably by Willem Dafoe as a banker caught in the middle of Hoffman’s gambit. Dafoe exudes the fear and discomfort of a “civilian” dragged into the high stakes of thwarting terror.  If the film’s end is somewhat ho hum, both actors are more than worth the watch, especially since this was Hoffman’s last finished picture.