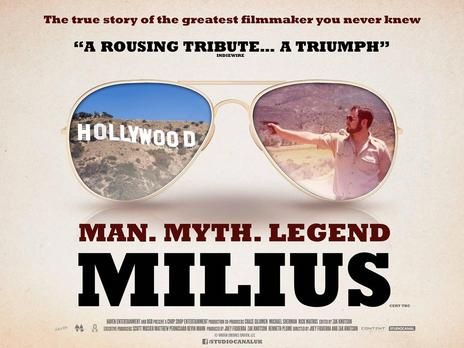 John Milius came up in Hollywood during what Harrison Ford calls “the second California gold rush”, with Spielberg, Coppola, Schrader, and Lucas. Destined and almost enthusiastic about going to Vietnam, Milius’ asthma kept him out of the war and he ended up at USC, then one of only three film schools in the country. He is a big bear of a man, a gun toting, messianic type making mythical, primal films. He wrote Dirty Harry, Magnum Force, The Life and Times of Judge Roy Bean, the Indianapolis speech in Jaws (which was 10 pages, but edited down to 5 by Robert Shaw so he could remember the material), and Apocalypse Now, and he parlayed his writing into directing (Dillinger, The Wind and The Lion, Conan the Barbarian, Red Dawn).

This documentary is loaded with fond remembrances of late 60s and 70s Hollywood, Milius’ crazy persona, and his distinctive approach to filmmaking. It also includes a forthright discussion about Milius’ banishment as a right-wing pariah after Red Dawn. Despite these strengths, the film is almost wholly uncritical, never once mentioning, for example, that Red Dawn is awful for reasons having nothing to do with its politics. The picture is also pat and sentimental, weighing the eccentricities of its subject against his ethics and determining the latter is to blame for any professional damage. Still, after Milius is near-bankrupted by his accountant, it is heartbreaking to learn that he tried to become a staff writer for Deadwood, and uplifting to know that Rome got him back in the game.