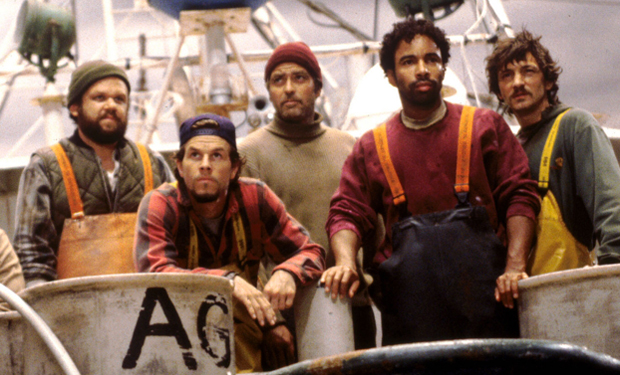 A Gloucester fishing boat captained by George Clooney goes out to get some fish and is soon in “the perfect storm.” Based on Sebastian Junger’s best-selling book about the fate of the Andrea Gail, the visuals are occasionally impressive but this is no Captain’s Courageous. The characters have a working class look but not the feel, and Clooney, who normally chooses well, is too damn dreamy to be the salty sea dog (he would have been better as the telegenic and wide-eyed meteorologist who captures the storm on his Doppler).

A better skipper would have been John Hawkes, the crewman furthest to the right above, who was nominated for an Oscar for Winter’s Bone and should be nominated again this year for The Sessions.

Junger’s book delved deeply into the precarious, brutal and chancy world of commercial fishing, but the script elects to show hard drinkin’, hard lovin’, misunderstood men of the sea while on land, and on the water, a boring band of brothers. The screenplay is either hackneyed or just plain dull.

“This is the the moment of truth”

“Billy, you’re not gonna’ like this but I’m gonna’ say it anyway.  You be careful.”

“I always find the fish.  Always.”

“Last night was worth it. There’s nothin like sleepin’ with you… just sleepin’… lyin next to you… all warm and sweet… Me wishin’ the mornin’ would never end.”

“You just caught me on a good night. I’m doing what I was made to do – and I’ve got a feeling I’m going to do it even better this time.”

And when crew member John C. Reilly is about to drown, he doesn’t scream or panic. Instead,  being a man of the sea, he says to no one in particular, “This is gonna be hard on my little boy.”

Hard on the audience as well, John.

There’s also a lot of forlorn women looking out the window for these good men of the sea (Diane Lane is completely wasted). Old Spice commercials are filled with greater verisimilitude.

Director Wolfgang Peterson made it to Hollywood on the strength of his gripping U boat drama Das Boot, but since then, he’s gone to sea twice, with The Perfect Storm and the even worse Poseidon.

He needs to stay on land.