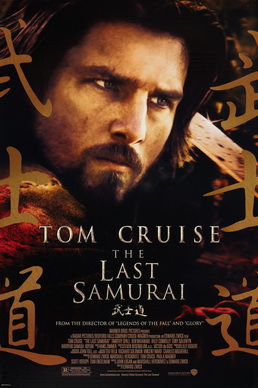 Tom Cruise is a dissipated, drunken Civil War vet who slaughtered women and children Indians (at the evil Tony Goldwyn’s behest) and must atone and “find himself” in the mystical East.

I’m not a Tom Cruise hater.  His effort is incomparable and he’s a star, in that, most everything he does on screen, if not interesting, is watchable. But he has two huge drawbacks.  First, he’s eternally youthful and thus, cannot effectively be world-weary.  Second, he is just weird in period pieces.  I didn’t like Cold Mountain, but Jude Law struck me as a man of his time and thus lent the film authenticity.  Cruise, on the other hand, is hopelessly 21st century and appears on the cusp of saying “Dude” a few times.

He is not helped by this hackneyed, American-hating, simplistic piece of garbage that is the script.