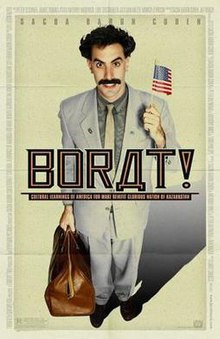 Funny to the point of tears, but a testament to the generous nature of Americans.  My fear was that Sacha Baron Cohen would be cruel to his subjects, but the film is, perhaps unintentionally, quite the opposite.  Yes, the rubes and dudes and New York toughs can be less than politically correct, but what they lack in modern manners they make up for in their easy acceptance of this bizarre, crude faux immigrant who tests the limits of all patience. As Christopher Hitchens noted:

Americans are almost pedantic in their hospitality and politesse. At a formal dinner in Birmingham, Ala., the guests discuss Borat while he’s out of the room… agree what a nice young American he might make. And this is after he has called one guest a retard and grossly insulted the wife of another… The arrival of a mountainous black hooker does admittedly put an end to the evening, but if a swarthy stranger had pulled any of the foregoing at a liberal dinner party in England, I wouldn’t give much for his chances.