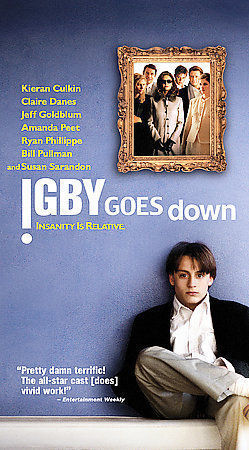 A punk of a little rich kid, Igby (Kieran Culkin), is sold to us as righteous because all who vex him are, comparatively, worse. There is his pill-popping, domineering mother (Susan Sarandon), his coldly efficient and soulless brother (Ryan Phillipe), and his go-go godfather (Jeff Goldblum). So, yea smarmy little shit Igby is indeed the best of the bunch.

Igby also has a schizophrenic father (Bill Pullman), an unhappy childhood, and he is in therapy. While “rebelling” (i.e., escaping various boarding schools and bumming off of people in New York), Igby harshly judges those around him, has some sex (Amanda Peet and Claire Danes) and comes to terms with . . . well, he doesn’t really come to terms with anything.  Rather, Igby endures angst, punctuated by slow motion scenes of our lonely rich boy running through New York – lost.

Yes lost in a world of hypocrisy.  Poor lost Igby, reduced to running through Manhattan to Coldplay or The Dandy Warhols.

This film might appeal to folks who fantasize about always having the perfect comeback and who fancied themselves terribly oppressed and misunderstood (because of their unflinching truth-telling and high standards) when they were teens. Folks who lived high school with a really cool soundtrack in their heads, and who think schizophrenia is bad, but it may just be more “honest” than normal life.

None of which may be surprising, as it was written and directed by Burr Steers,  who has familial ties to Jackie Kennedy and Gore Vidal and even Aaron Burr. Like Igby, Steers was educated at the best, kicked out by the best, and eventually, forced to attend military school.