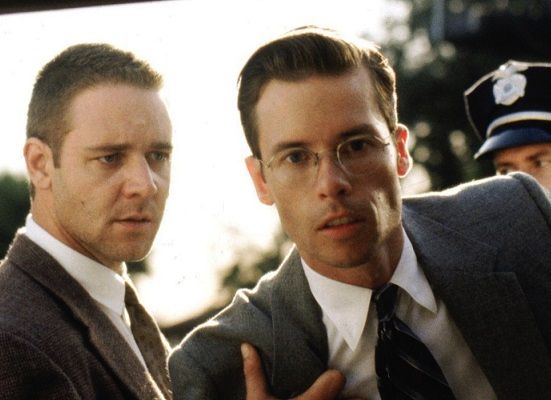 A byzantine noir potboiler set in post-war go-go America, rich in gangsters, drugs, sex and corruption, this is one of my favorite films and an excellent adaptation of James Ellroy’s classic novel.  I’m re-posting because I just noticed it is available streaming on Netflix.

Depth, pacing, and authenticity – the flick has it all.  The three main characters are rich and finely drawn.  LAPD Lt. Edmund Exley (Guy Pearce) is half ambition, a quarter condescension, and a quarter insecurity.  Anything he fears he must best, even destroy.  He fears fellow cop Bud White (Russell Crowe), who is outwardly all muscle and frontier justice.  So he testifies against White in a brutality scandal to have him kicked off the force.  White survives Exley’s testimony, but White’s partner does not, and thereafter, White seethes with hatred and desire for payback.  When they become entwined in the same investigation, a mass shotgun slaying which claims White’s disgraced partner, they clash, and yet, they are forced to work together.

Prior to formation of the uneasy alliance, White tries to tear Exley’s head off.  Their supervisor, Captain Dudley Smith (James Cromwell) intervenes in an exchange that typifies the dialogue:

DUDLEY SMITH: It’s best to stay away from the lad when his color is up.

ED EXLEY: His color is always up.

DUDLEY SMITH: Then perhaps you’d do well to stay away from him altogether.

A third detective, Jack Vincennes (Kevin Spacey), rounds out the trio.  I saw Spacey on Inside the Actors Studio and he said that he patterned Vincennes on Dean Martin in Rio Bravo.  It shows.  Spacey’s Vincennes alternately swaggers and hunches, bravado followed by just a little shame.  He’s corrupt, he’s good at being corrupt, and corruption has made life easy, but he is torn between the celebrity and easy cash and the guilt his choices have brought him.  In a film that is so sweeping, Spacey has little time to make the transition from crook to clean.  But he does it in a very brief scene, alone, at a bar, as he eyes a $50 bill (a payoff from the slimy editor of the scandal rag Hush, Hush, played by Danny Devito).  Spacey looks at the bill, sees his face in the mirror, places the bill on his shot, and leaves to do the right thing.  It’s a beautiful, economical moment.

Kim Basinger won the Supporting Actress Oscar as the high class prostitute who captivates Bud White, and while she’s sleek, sultry and affecting, every other major performance is better than her own and more deserving of accolade.

The care taken by director Curtis Hansen (who we sadly lost in 2016) is evident in every scene, be it a jail melee’, a triple interrogation, or a stunning shotgun shootout.   Hansen is straightforward and confident, and the picture positively hurtles but it never feels pell mell.  Save for some gentle interplay between Basinger and Crowe,  the movie is quick, sharp movement, punctuated by real or verbal violence.   It never, ever drags or becomes self-indulgent.  You love what you are seeing but want it to be over because you want to see more.

The film also oozes the L.A. of the time period. It feels right and looks better (for the opposite – a tacky, awful, ridiculous L.A. film –  see Mullholland Falls).