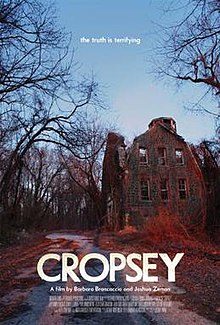 Cropsey focuses on an accused Staten Island child murderer in the 70s and 80s.  The documentarians do a very nice job of melding a crime story (there is, in fact, an accused killer) with a child’s sense of the bogeyman.  During my childhood, there was a myth of the house where a father slaughtered his family (in fact, a grandmother had a heart attack), there was the deranged retarded man who dragged kids to the woods (no, but he did sell newspapers), and, of course, the exorcist boy was in the vicinity and went to my high school for a short time.  Cropsey brings back those good ole’ creepy days.