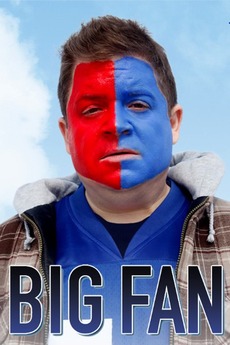 Patton Oswalt gives a helluva performance in this grim film, one that surprises given the picture’s refusal to have its main character validated or bettered.  Oswalt is a 34 year old Staten Island parking garage attendant who lives with his mother and eats, breathes and exists for the New York Giants. He is so committed he writes prose in his booth, in particular, a speech he will give nightly to a sports radio station on behalf of his team.  When he sees his idol (a Giants linebacker), it is like seeing a super hero, and he follows him to a strip club, where things go horribly wrong.

This is a strange and quirky picture, and it rises on Oswalt’s fealty to his bizarre code. His loyalty is not to himself, his lone friend (the always down-to-earth and believable Kevin Corrigan, who at this juncture should be in The Supporting Character Actor Hall of Fame), his family, or justice, but always to the team, which is nuts but also endearing, and given his loneliness, understandable. Oswalt is actually quite moving in a “Travis Bickle meets Jim Rome” way.

You also get a different view on why certain people smash their TVs,  brawl, or become hysterical when a team to which they have no foundational connection other than geography loses.