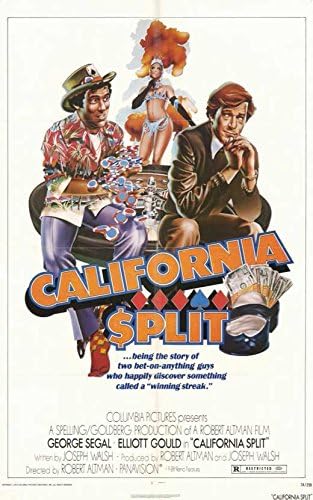 Robert Altman directed this film after his three masterpieces – M*A*S*H, McCabe and Mrs. Miller, and The Long Goodbye – and directly before his next one, Nashville. It has all the hallmarks of an Altman film . . . overlapping dialogue, a leisurely almost poetic pace, and a complete disregard for traditional narrative.

The film is essentially about two degenerate gamblers – George Segal and Eilliot Gould – who haunt the poker rooms, casinos and race tracks of California and Nevada in search of the juice. While Gould is carefree and seemingly happily stuck in the mire, Segal has one foot in the straight world and one foot in the dens of iniquity. He owes, he craves, and he can’t wait for the next shot at a pot, so much so that when Gould leave him for a week, he feels as if he’s being ripped off, that somehow, his partner is keeping a score away from him.

Unlike some of Altman’s better films, there’s no real character development here.  Segal and Gould simply happen upon each other at a poker room and start hanging out and kibbitzing, often with two working girls who live with Gould.  Altman is so intrigued by the machinations of the lowlife, he forgets that we are only here to see what happens to these addicts.  And, until the end, not much does happen to them.

Ultimately, Segal comes to a fork in the road, but it is a bolt from the blue.  We don’t know much about him and Altman doesn’t really let us in.  So, when he takes one road over another, it is of no real moment.

Still, it’s a fascinating picture with a real affinity for the disreputable denizens of the 70’s cocktail bar, race track and casino.  Altman doesn’t glorify but he does offer a vivid portrait of the world.