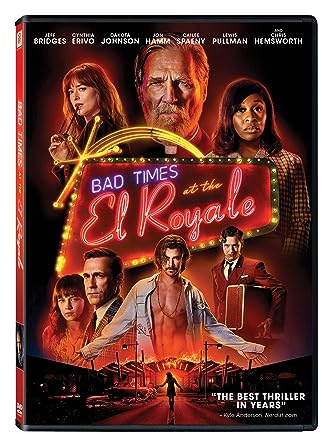 The first half of this Tarantinoesque Key Largo is pretty good.  Four strangers (Jon Hamm, Jeff Bridges, Cynthia Erivo and Dakota Johnson) show up at a past-its-prime, resort hotel in the Nevada/California mountains, the kind of place where Sammy, Judy and Frank might have swung back in the day.  They all have a story, which we learn in flashbacks, some of which are more compelling than others.  Their destinies collide explosively.

I was worried the film would be too kitschy and cool, too mannered, but it manages to keep a lid on it for long enough to be engaging.  Other problems keep it from being unequivocally good.  For one, Dakota Johnson barely even registers.  She’s undeniably attractive but as a shotgun-toting Alabaman on the run from her better looking Charles Manson (Chris Hemsworth), she’s as convincing as Melania Trump.   Worse, Hemsworth tries to chew scenery, but the best he can do is ape Val Kilmer in The Doors (I guess all Svengalis from the late 60s had that lizard lope).  To cement his powers of persuasion, we get a flashback to Hemsworth preaching to his hippie flock, and let’s just say, he’s more Jim Nabors than Jones or Morrison.

Erivo is very good, but she’s a singer as a character and in real life.  Writer-director Drew Goddard (The Cabin in the Woods) feels compelled to have her perpetually employing the pipes, an unnecessary distraction.

On HBO.  Fine if you got nothing else going on.