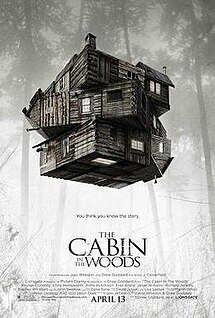 Five college kids – the jock, the stoner, the brainiac, the slut and the virgin – go away for a party weekend at a remote cabin in the woods.  They are warned off by a creepy hick who runs the nearest gas station, but they are young and confident and will have none of his superstitious guff.  In the cellar of the cabin, they find a diary, unlock a mystery, unleash a trio of zombified monsters, and . . . Well, you know the rest.

You don’t know the half of it.  I thought the good reviews were the result of a reprise of Sam Raimi’s creepy, zany approach in Evil Dead and Evil Dead 2, with maybe some clever Kevin Williamson (Scream) thrown in.  I was way off, though the picture does feel as fresh as those movies when they came out.  Certainly, some of the lines are slyly self-referential, but wrapped around the standard “don’t go in the woods” approach is a whole different twist.  I can honestly say I’ve seen nothing quite like it in the horror genre.

Producer/co-writer Joss Whedon is after my own heart in his summation of the plot:  “On another level it’s a serious critique of what we love and what we don’t about horror movies. I love being scared. I love that mixture of thrill, of horror, that objectification/identification thing of wanting definitely for the people to be alright but at the same time hoping they’ll go somewhere dark and face something awful. The things that I don’t like are kids acting like idiots, the devolution of the horror movie into torture porn and into a long series of sadistic comeuppances. Drew and I both felt that the pendulum had swung a little too far in that direction.”

Again, I can’t say much, but of particular note are the contributions of Richard Jenkins (the ghost father in “Six Feet Under” and the beleaguered one in Step Brothers) and Bradley Whitford (Josh, from “The West Wing”).  ‘Nuff said.