I was reading Scot Yenor’s piece “What Sexbots Teach Us About Happiness and Love” and realized that he, ultimately, can’t really tell us what they teach, because as of today, there are no sexbots.   According to Yenor, however, by 2050, we will have beings that “converse with their partners, dwell on their emotions, anticipate their needs, deliver forms of companionship and love, and perform whatever sexual act one would want, just like the machines in ‘Ex Machina.’ All of this will equal ‘love’ and ‘sex’ with robots.”

There are sexbots in Ex Machina, but that was hardly the first film to suggest a world where we have created synthetic sexual partners.  What do the movies tell us about that future?

A great deal, actually.  Film is often a surprisingly accurate harbinger of future developments and trends.  In Logan’s Run, a dystopian sci- fi flick from 1974, society is kept youthful and vibrant because its inhabitants accept that at age 30, they must be killed in a “rebirth” ritual.  Some folks don’t take too kindly to that end, and they run, whereupon they are hunted down by the likes of Michael York and Richard Jordan.  But before folks turn 30, they live in resplendent hedonism and if they want to have sex with a partner, any partner, they turn to a machine in their nifty apartment and select from others who are also looking to have sex.  Indeed, it is through one of these sex teleporters that York finds a runner, Jenny Agutter.

Today, we call this Tinder.

But Agutter is an actual woman, not an android.  What about sexbots?  In Westworld, the 1973 pic where Richard Benjamin and James Brolin enjoy an adult theme park of the old West until it all goes terribly wrong,  there are bordellos stocked with android prostitutes, but they are cold-eyed, near animatronic.

A year later, in The Stepford Wives, the androids became more responsive but they still have a soullessness that is forbidding. 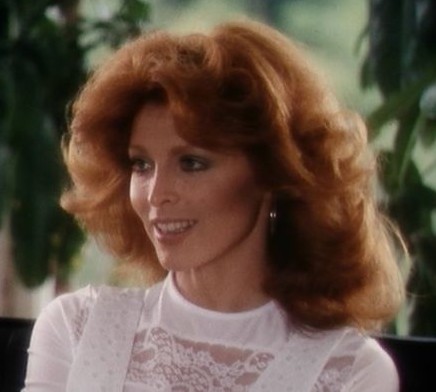 Indeed, The Stepford Wives is a feminist tract based on the idea that men, given their druthers, truly want a pliant, attractive dimwit in a floppy sunhat as a mate.

Fast forward to the reign of Arnold Schwarzenegger and The Sixth Day, and the prototype has gotten even more advanced.  The newer model  – a hologram that also apparently has sensory ability – won’t glitch. 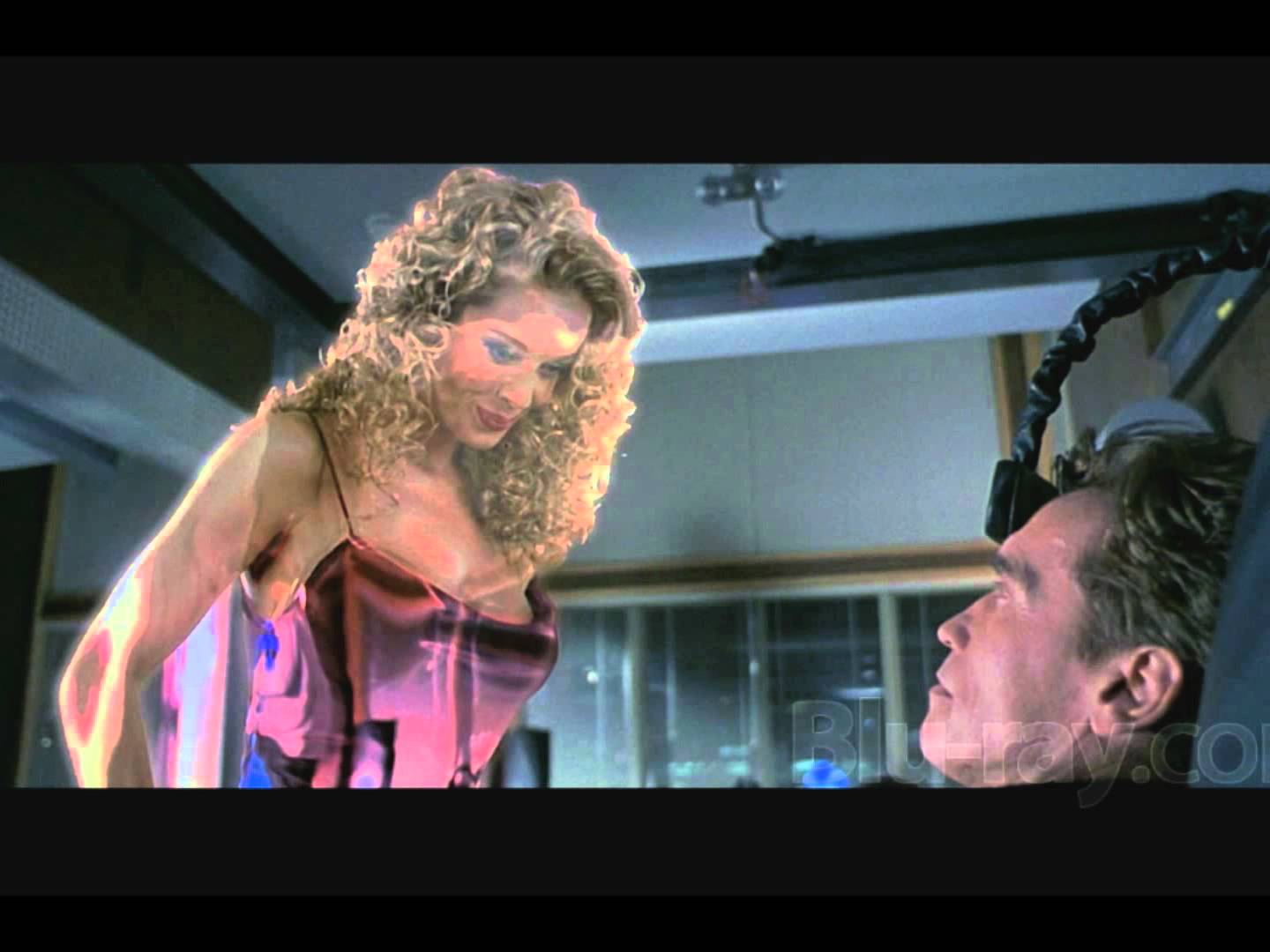 Again, however, the message is one of emptiness, a blonde spouting inanities about sports and delivering insincere compliments.  Looks fun, but not exactly an enticing replacement.

The emptiness becomes positively sad when we get to the gigolo Jude Law in Steven Spielberg’s A.I. Artificial Intelligence, but this is also the first representation where the sexbot has some convincing rap.  Law is a stud for hire, but what he gives his clients is more than physical love, as is clear from his verbal foreplay:

JOE
Of me? That I will hurt you?

JOE
I think… you’re afraid of letting go. I think you’re
afraid of happiness. And this is starting to excite me. Are
you afraid of seeing the stars…Patricia? I can show you
how to reach them.

PATRICIA
I’m afraid… of what you’ve got under there. May I see what
it looks like first?

JOE
Is this your first time… with something like me?

PATRICIA
I’ve never been with mecha.

JOE
That makes two of us.

PATRICIA
I’m afraid it will hurt.

JOE
Patricia…once you’ve had a lover robot, you’ll never want
a real man…again.
Are these the wounds of passion?

Singer: Are the stars out tonight?
I don’t know if it’s cloudy or bright.
I only have eyes for you, dear!

PATRICIA
Do you…do you hear that music?

JOE
You… are a goddess, Patricia. You wind me up inside. But
you deserve much better in your life. You deserve… me.

So, the future brings us flesh goodies, but they are diversions and in many cases, sinister ones.  In Blade Runner, the moral heart of the film lies in the fact that Rachael (Sean Young) does not know she is a replicant.  In all other ways except her expiration date, she is human.  She feels love, she cries, she has fear, and the cruelest component of her existence is the self-awareness of her creation, her ability to actually deduce that she may be a thing, and a thing with a date certain for death at that.  The value and dignity of the replicants are certified by their innate sense of being human, and one of the most affecting scenes is when a runaway replicant, pleasure model Zhora, is shot, because she seems so much like us. 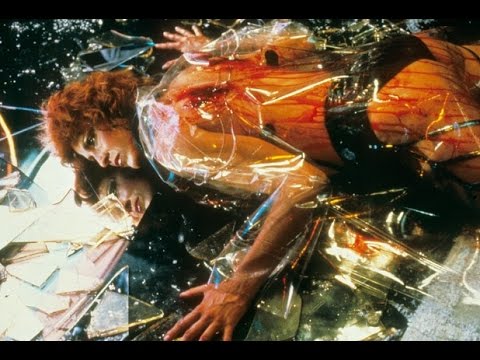 So too with Ex Machina, referenced by Yenor, a brilliant mash-up of a lot of the above films and Deathtrap.  The two sexbots in Ex Machina are nascent thinkers and when they get to thinking, they determine that a life being at the beck and call of Oscar Isaac is not to their liking.  Moreover, Alicia Vikander evinces all of the burgeoning curiosity and wonder of a new human, which, or course, make her dispatching of her Dr. Frankenstein acceptable.

At least to date, the movies have pretty much tracked with his conclusion, as writers have made sexbots lethal, sympathetic representations of man’s hubris, or both.  Indeed, in 1977’s Demon Seed, which I did not see, an A.I. computer eventually rapes his maker’s wife to be immortal

The one filmic departure is Her, but even in that picture, Joaquin Phoenix’s relationship with Operating System Samantha (Scarlett Johansson), rewarding as it seems at times, cannot be consummated physically (they try to use a human sex surrogate, but the encounter goes awry) and ends with the cosmic joke that reveals her be a virtual slut:

Do you talk to anyone else while we’re talking?

Are you talking to anyone right now? Other people or OS’s or anything?

Theodore is shocked, still sitting on the stairs, as crowds of people pass by him. He’s looking at all of their faces. He thinks for a moment.

Are you in love with anyone else?

What makes you ask that?

I’ve been trying to figure out how to talk to you about this.

What? What are you talking about?  That’s insane. That’s fucking insane.

I know it sounds insane. But – I don’t know if you believe me, but it doesn’t change the way I feel about you. It doesn’t take away at all from how madly in love with you I am.