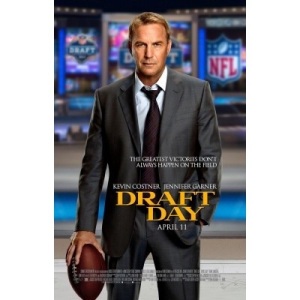 This is a football movie made by people who, if they ever saw a football, would mistake it for hippo shit.  Kevin Costner is the General Manager of the Cleveland Browns. His Dad just died. He’s in crisis. He’s a “go with your gut” kind of guy. He has the number 1 pick in the draft. He intends on getting a hot shot quarterback but becomes disenchanted when he learns that the quarterbacks’ teammates didn’t come to his 21st birthday party. Costner is then offered 2 NFL starters and 2 future number 1 draft picks for that number 1 pick. He declines the trade. Instead, he uses the number 1 draft pick to select a linebacker who we have been told “may” be selected 15th. For non-football fans, this is the equivalent of Bill Gates selling his Microsoft shares for a Shetland pony and a wheel of Gouda.  But Costner desires the linebacker because he saw the linebacker get kicked out of a game for giving his dying sister a football after he scored a touchdown.

Nothing I just wrote about the plot is made up.

Then, Costner wheels and deals with other NFL general managers to come out of the draft with 100 draft picks. One general manager is 11 years old. Another releases his bowels when Costner raises his voice during a conference call.  All the others are at risk of dying from swallowing their own tongues.

The movie is about men, and choices, and your instincts and tradition and commitment and respect.  The film also has a minor a romantic subplot between Kevin Costner and Jennifer Garner so uncomfortable it has an almost molesty feel. Garner feels it. She damn near makes herself catatonic to get through this travesty. Costner merely looks embarrassed.

And it was endorsed by the NFL. When current NFL Commissioner Roger Goodell walks out to open the draft, the audience erupts in applause.