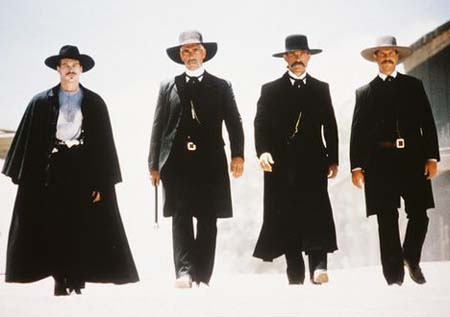 I only thought of this film because of Deadspin’s ode to Val Kilmer’s Doc Holliday, and on reflection, Kilmer’s performance is not only the best thing about this western, it’s the only good thing about it. Thus, to have one performance account for 2.5 stars – that’s really something. But Kilmer’s languid, dissipated Holliday is a treat to behold.  He is having a blast with the role, and while everyone else is somber or uncomfortable (or both), he chews and chews and chews.

Unfortunately, no one else (except perhaps Powers Boothe, who actually twirls his mustache as the evil leader of the redlegs, Curly Bill) is having any fun. The Earps (Kurt Russell, Sam Elliot, Bill Paxton) are dull as dishwater, particularly Russell as Wyatt, who decides that fury and blue eyes will see him through.  The villains, and there are scads of them from any number of sitcoms, look like they’re at cowboy camp. In fact, this whole movie has a certain slipshod, Eagles photo-shoot for Desperado quality to it.

The women are weak as well. As Kilmer’s moll, Joanna Pacula is just a hair shy of the cartoon Natasha, and Dana Delaney as Wyatt’s love interest lacks the lustful lure necessary to break down a rigid lawman. Delaney is a school marm, not a vamp; she doesn’t sizzle so much as reach room temperature.

Director George Cosmatos’ best efforts besides this leaden dog are Stallone vehicles, Cobra and Rambo: First Blood Part II. After Tombstone, he got one more feature (a Charlie Sheen vehicle) and that was that (he died in 2005). After Tombstone, which is a pedestrian, forgettable, script, writer Kevin Jarre penned The Devil’s Own and The Mummy and, again, that was that.

But oh what Kilmer does with what he’s given:

The charms of the character are legion.  As explained by Kilmer in a recent interview:

So Bob Dylan loves “Tombstone”, It turns out. I found out he was in New York so I called my friend and I said you know, I’d love to meet him, is there any chance and he says, “I don’t know, I’ll find out.” And the next call I got I thought was going to be my friend, but it wasn’t, it was Bob.

I was real excited, like a crazy fan, like a child; it was so great. Basically it was like nothing. It was like we were old friends, it was like “you want to come over?” and he was like, “yeah.” So, hangs up the phone, I was newly married and we had a baby and I went in and said “I think Bob Dylan’s coming over…I’m not sure, it could be a hoax…”

He shows up and sits down and he wants to talk about “Tombstone”, but I just can’t, you know, nor can I talk about any of his stuff. Eventually he says, ‘ain’t you going to say anything about that movie?’ and I said, “do some ‘Blowing in the Wind’ and I’ll…”

That’s what I said to him, basically I said no. I get like that sometimes. So I turned him down and, I thought, no one turns this guy down. Anyway, I felt like an idiot afterwards, well, yeah I could have said a few lines. They’re fun lines too, like people still ask me to say lines and now I’ll tell any schmo in the airport, I’ll say “I’m your huckleberry”, but I wouldn’t say it Bob Dylan!

I felt so bad about it. I was like how could I make it up to him? So what I did was, I recorded “It’s Alright Ma, I’m Only Bleeding” but as Doc Holiday and I put in all of the big lines from the movie into the song and made him a little tape