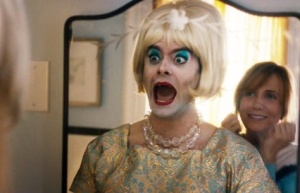 When the two major characters of a film attempt suicide in the first scene, by the end of the picture, you’re not supposed to regret their lack of success. The Skeleton Twins is a ragged, cloying, mannered dramedy starring entirely-out-of-their-depth SNL alums Kristen Wiig and Bill Hader as estranged siblings brought together by near tragedy. Wiig is utterly lost here, and all her tics and quivers cannot make up for substance. Hader is a little better, if a facsimile of a gayer Sean Hayes from Will & Grace is the aim.

The siblings are the children of tragedy, their father a suicide and their mother a hackneyed New Age narcissist introduced only to make her children seem noble. They are presented to us as seeming losers who have lost their way and their special bond on the rocky road of life. They come alive in a weirdly incestuous routine of replaying bits and hijinks from their childhood, and the watching (particularly, a drawn out stoned scene featuring Wiig’s HI-larious flatulence and a lip-synch duet brazenly stolen from Bridesmaids, sans humor) is cringeworthy. These two are as likely to be siblings as Olivier and Midler, but as foreign as they seem, the real problem is that they are fundamentally disinteresting to anyone but each other. It’s like spending an evening with two dull people who constantly crack each other up with reference to inside jokes and childhood excesses (burps, farts, hopes and dreams). Um. Check please.

As for the story, it is a lurching mess, serving primarily to highlight ridiculous and arty visuals, such as a slow dance in Halloween costumes that is finger-down-your-throat precious. When nothing happens (the film feels interminable), a character says or does something clunky and overt, and we slog forward. One example: Wiig is unhappy in her marriage to Luke Wilson and surreptitiously takes birth control pills while they are “trying” to get pregnant. Hader tips Wilson off after a HI-larious scene where hetero Wilson takes homo Hader rock climbing, which is funny because . . . gay. The clue? Sometimes my sister hid things when we were kids. And off Wilson goes to find the pills in a basket of decorative soaps.

An awful hipster picture with nary an authentic moment in it. Makes Zach Braff seem like Cassavettes.