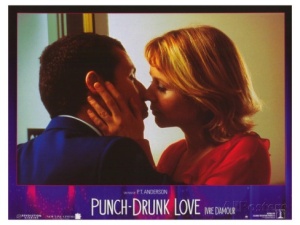 Paul Thomas Anderson’s follow-up to the sweeping, first-half brilliant, second-half excessive Magnolia could not have been more different, a love story between the closed-off, anger-ridden Adam Sandler and the co-worker of one of his sisters, Emily Watson. Sandler, a small business owner in LA, is clearly plagued by inner demons, exacerbated by his extroverted, intrusive and brutal sisters (he has 7 of them and when they are not calling him incessantly at work, embarrassing him in front of Watson, or blithely trading in his confidences, they are recounting humiliating stories from his youth). Sandler seeks connection and unfortunately, he does so via the use of sex call operation run by Phillip Seymour Hoffman that specializes in blackmail and harassment. This crisis comes down upon Sandler right as he has forged a true, real connection with Watson.

Sandler’s movies are almost all bad, but I’ve come to the conclusion that he’s running a welfare program for each and every one of his comedian compatriots, and for this, he should be commended. When he receives good material, such as this film, The Wedding Singer and Funny People, he suppresses his twin excesses – the goofy and the superior smart aleck amongst the goofier – and presents nuanced, multi-dimensional characters. Here, his character is immediately sympathetic, just this side shy of a man who has voices in his head, and I was reminded of Bradley Cooper’s more realistic character in Silver Linings Playbook. Both yearn for normalcy. The former almost appears to have wasps around his head, while Sandler has them in his insides. Watson calms his roil, and her presence allows him to use his anger management issues in a positive fashion.

As much as the film emphasizes Sandler’s struggle, the moments of peace he earns in his time with Watson are poignant, if unique:

Anderson’s visuals put Sandler’s torment under a glare, constantly stalking him, scoping him.  Similarly, the music is a staccato of plinking piano, off-kilter horns and rolling drum, giving the viewer a sense of what it must be like to be in Sandler’s head. The shots and clatter only settle when Watson appears, and in those moments, Anderson re-creates the whirling, lightheartedness of a traditional romantic comedy from the 40s.

A truly unique picture, it’s unlikely you’ve seen anything like it.