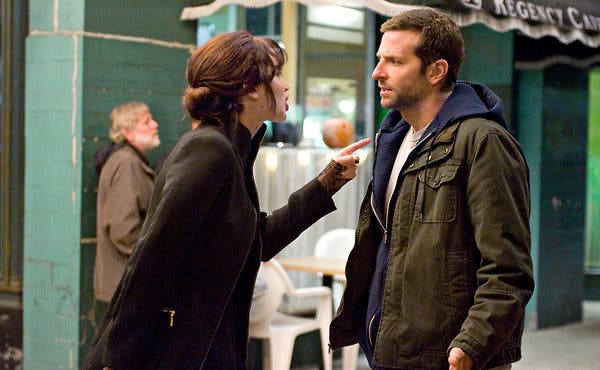 David O. Russell (Three Kings, The Fighter) has written and directed a special drama/romance, made all the better by a flawless ensemble. Bradley Cooper is just out of an 8 month court ordered stint in a psychiatric ward after having found his wife in the shower with her lover and beating the hell out of the former. Cooper is also bipolar. Under police supervision and ensconced in the Philadelphia home of his OCD, Philadelphia Eagle fanatic, bookie father (Robert De Niro) and supportive mother (Jackie Weaver), Cooper plots his way back into his wife’s heart, enlisting the help of a neighbor (Jennifer Lawrence) who has a few not insubstantial psychiatric and familial problems of her own. Unfortunately, he does this while forswearing the medications that will keep him on an even keel.

The film seamlessly portrays the pressure and effect of mental illness on a family with the Herculean effort of love and commitment it takes to manage it. Intertwined is a beautiful, engaging love story.

Cooper is rightly nominated for Best Actor. His performance is riveting, and no easy feat.  He presents a character plagued by demons, trying to hold them back, while leveling off to actually grow. As I walked out of the theater, my estimation of Cooper as merely a more electric Ryan Reynolds was erased, and Daniel Day Lewis’s turn as Lincoln seemed humdrum in comparison.

Jennifer Lawrence, also nominated, also wows. She is wounded and in crisis, and as she reaches for Cooper, her desperation and need are palpable. De Niro, who I wrongly suspected might have been nominated for best supporting actor as a nod to his overall body of work, is touchingly desperate as a father who carries his own mental disability as well as the weight of failing his son. Last, but certainly not least, the film’s fourth nominee Jackie Weaver plays Cooper’s mother lovingly while communicating the weariness of someone who has been required to hold a tenuous family together. The rest of the cast is also very funny, especially a portly Chris Tucker, who plays a patient from the psychiatric ward with a penchant for self-furlough.

This is a tough film to make. Mental illness does not lend itself either to yuks or romance, and without Russell’s deft hand, it could easily have been offensive, pat and/or schmaltzy. Cooper’s outbursts are funny, but that is because he’s a funny character whose disability has removed his filter. But Russell does not sugarcoat the illness, and when Cooper is manic, we are scared for him and those around him. Lawrence is also hard, mercurial and often tough to take, and normally, she would have been the whore with a heart of gold. In fact, her damage requires Cooper’s strength and the two share a strong chemistry.

To be able to construct a sweet, original romance from such stuff is both an achievement and a damning indictment of almost all romantic comedies/dramedies that have so little to say about people. This is the best movie of the year.