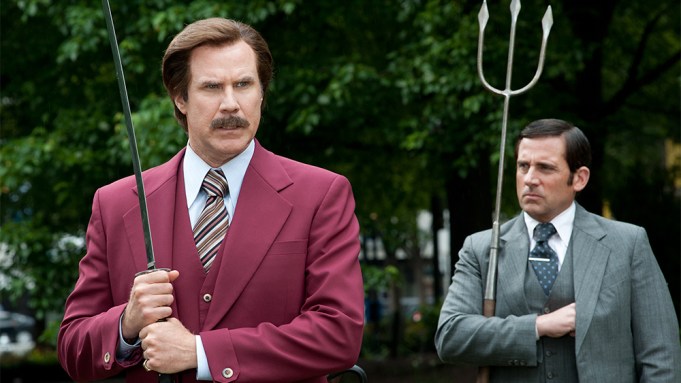 Seemingly improvised throughout, the sequel is alternately lazy and uproarious, but by the end, more the former. The Channel 4 news gang (Will Ferrell, Steve Carell, David Koechner, and Paul Rudd) have reunited, moving from San Diego to New York City, to take the helm of the graveyard shift on the first 24 hour cable news channel. Soon, Ferrell’s Ron Burgundy is back on top, discarding his friends, cementing his fall (he is even stricken blind), only to return triumphant.

In the first film, Ferrell’s bosses (Fred Willard and SNL alum Chris Parnell) held their own as comedians, contributing to the fun. Ferrell’s new boss is the sassy, Pam Grieresque Meagan Good, who is placed in the film for a painful scene where Ferrell visits her family and tries to “act street.” She’s not funny, but she’s not alone.  Harrison Ford, Drake, Kanye West, Tina Fey, Amy Poehler, Jim Carrey, Sacha Baron Cohen and others appear, most for a reprise of the first film’s news team rumble, but the melee is woefully disappointing. Gone are the unexpected trident and grenade, the scores from Star Trek and West Side Story, replaced by celebrities who just wanted in. Sure, Ford turning into a werewolf is pretty cool, and who doesn’t laugh at an unexpected minotaur, but these guys aren’t very funny.  And Liam Neeson and Marion Cottilard? Zzzzzzzzzzzzzz. Will Smith?  He wasn’t even funny in The Fresh Prince of Bel Air. Even Vince Vaughn’s return as Wes Mantooth is a little dull. Speaking of dull, Kristen Wiig as Steve Carell’s love interest is Sominex.

Director Adam McKay also tries to deliver a lesson about the degradation of the news. He usually appends his simplistic political tracts to the end of his goofy movies, so you could walk out of The Other Guys or The Campaign while the credits rolled and he lamented Wall Street greed or the Citizens United decision.

Other bits fare better, including Ferrell’s interactions with his young son and his bottle feeding of a baby shark; Carell’s panic at the loss of his legs on a green screen; and especially, the news team’s smoking of crack on the air.