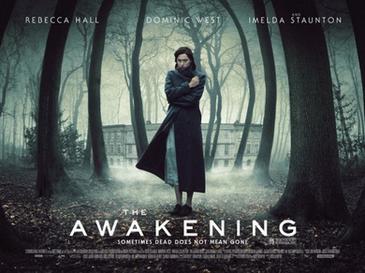 A hodgepodge of The Devil’s Backbone, The Others, The Sixth Sense, and The Orphanage, the resulting stew lacks the intrigue, creepiness or depth of any of those films. Post WWI, a noted spiritualist debunker played by Rebecca Hall (The Town, Parade’s End) is enlisted by a teacher (Dominic West) to come to a remote English boy’s school. A young student has died and the children have been traumatized, not only by that tragedy, but by the ghost of another boy. After begging off, Hall unconvincingly takes on the challenge, easily solving the more recent death in the first quarter of the film. The rest is devoted to her chasing the ghost about, falling for West, and being manipulated for a big Shymalanesque reveal that is rushed, awkward and unnecessary. The film is overly ambitious, neglecting the less showy aspects of a ghost story, like pace, investigatory patience, and diversion. Instead, Hall tears around the house, easily converted from skeptic to believing hysteric, until her ludicrous connection is clumsily offered via flashback. It’s director Nick Murphy’s first feature and he is overmatched. Worse, there are a mere three scary moments, a number The Woman in Black provided ten fold.