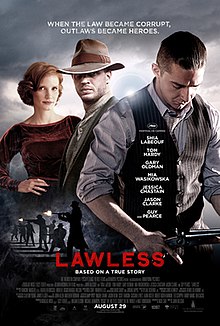 I wonder how a movie like this gets made these days.  Tom Hardy, Jessica Chastain, and Shia LeBeouf can’t open it, the milieu (1930s backwoods of Virginia) doesn’t relate, it can’t be cross-marketed with a soundtrack, and the script, which could override all of the above if it were really good, is not.  In fact, there is not a memorable exchange in it. Hardy is colorless (he resonated stronger with a mask in The Dark Knight Rises), Chastain a stock dancer with a heart of gold, and LeBeouf showy, always “acting!”

The Bondurants are bootleggers in Franklin County, Virginia.  On principle, they won’t pay off the authorities, which smacks of stupidity more than honor or savvy business sense.  The authorities hire Guy Pearce to shut them down. Pearce must have sensed what a dreary endeavor this was to be, so he took on the affectation of a sexually dysfunctional dandy/germaphobe.

And he hates hillbillies.

Pearce goes too far, Hardy brings hell and damnation with him, and it ends with an underwhelming shoot-out and an interminable voice-over coda by LeBeouf.