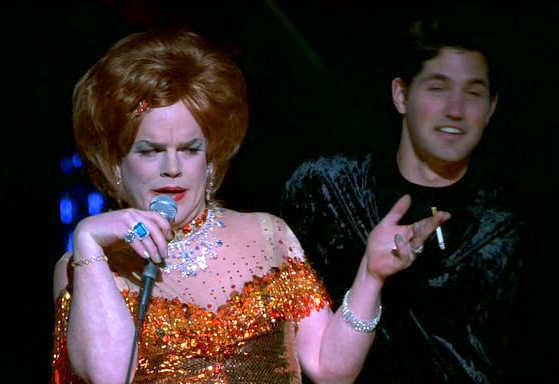 An engaging and surprisingly even picture about a simplistic, homophobic ex-NY cop (Robert De Niro) living in the same apartment building as a drag queen (Phillip Seymour Hoffman).  De Niro has a stroke and needs the drag queen’s assistance as a voice coach (she teaches singing) so he can learn to talk again.  This is two fish, different waters.  You’ve seen it.  But through the skills of Hoffman and De Niro, it works really well, and review of the picture allows a meditation on Hoffman.  I remember him as the spoiled rich fink in Scent of a Woman, the unfortunate thief in the remake of The Getaway and the dunce with a badge in Nobody’s Fool.  Even in such small roles, he resonated.  Soon came absolutely indelible and brilliant supporting turns, as the closeted and adoring fan of Dirk Diggler in Boogie Nights and rich visiting playboy Freddie Miles who smells a rat in The Talented Mr. Ripley.  Leads came next, including a best actor Oscar for Capote, but Hoffman is in the club with Duvall and Hackman – he can play the lead, but he’s more often better in support or ensemble, be it the outrageous Lester Bangs in Almost Famous, the chilling priest in Doubt, or the stubborn manager Art Howe in Moneyball.  He’s pitch-perfect and makes everyone around him better.

His role here is actually a very different character for Hoffman.  He’s flamboyant, wildly emotional and central.  These are easy roles to botch, but Hoffman communicates both the external vamp and internal insecure deftly (his hysteria as his boyfriend abuses him is particularly touching).  He’s very moving, and De Niro (who is also good as the disabled grump) does not get in his way.