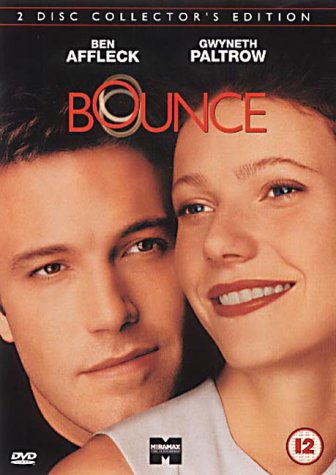 In 1998, Don Roos came out of the gate with The Opposite of Sex, one of the funnier comedies of the 1990s.  As a reward, he got to helm a big budget romance with a promising story.  A playboy gives his plane ticket to a husband/father so the husband/father can be a good Dad and the playboy can make a girl at the airport bar.  The plane goes down.  The playboy is affected and insinuates himself into the widow’s life.

First problems first.  The playboy is Ben Affleck.  Affleck has found his way as a director (Gone Baby Gone and The Town are excellent and fine, respectively). When acting, however, he is best in an ensemble – a little goes a long way.  But Bounce came out when they were trying to make Affleck a lead, which he is not.  He is a leaden, two-trick pony (the eyes welling with tears; the set jaw).  Affleck is the best friend, not the lead.  He can occasionally rise to the occasion, but he is no more than a big, good-looking light-stepper.

Paltrow, who prior to her strange incarnation as a country singer, could lead, is weighed down by a script that requires her to lament and panic at almost every turn.  She is less and less sympathetic as she veers into the territory of mentally unbalanced.  Perhaps this is because she is being stalked by Affleck, who has decided to change his debauched ways on the back of the husband’s death.  The effect is creepy and doesn’t lend itself to a love story.