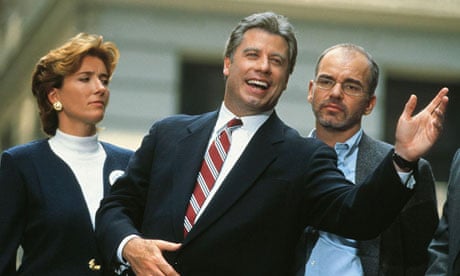 Modern political movies are a tough sell.  Last year, George Clooney provided the dry, obvious and somber The Ides of March (no one got stabbed – but boy, as dull as it was, it would have helped).  The American President was execrable, a love letter sent to suburban progressives who must not only follow but adore their leaders, preceding the advent of The West Wing and Martin Sheen as President Awesome.  The most recent good political movie was the rollicking Charlie Wilson’s War, which Mike Nichols directed.

Nichols must have a knack for it.  Primary Colors is Nichols’s cinematic mirror on the rise of the Clintons, an adept story of the tension between political values, electoral success and human frailty, all wrapped up in a big, fun yarn populated by larger than life characters (one of whom served as our regularly entertaining president from 1992 to 2000). There is no need to discuss the plot.  It tracks history loosely, but it will be familiar.

It is also an actor’s film and those actors are aided by a very tight, yet breezy screenplay.  The characters talk the talk of political campaign work, yet we are not burdened by the mundane or weighty.  Better, divergence into the philosophical is not stilted or preachy.  Adrian Lester, the true believer sucked into the expedience and fervor of a presidential race, serves as our somewhat wide-eyed guide.  He exudes the right amount of awe and moral ambivalence.  Billy Bob Thornton is James Carville, and he utters my favorite line about politicians to Lester:  “That’s what these guys do. They love you and then stop lovin’ you.”  Emma Thompson is the increasingly embittered and mercenary Hillary; she is determined, yet both fragile and icy.  Larry Hagman delivers a nice turn as a morally tainted dark horse challenger, and Kathy Bates keeps the fun in the picture as a political operative who knows the terrain of small town politics gone national.

Now, playing a president is a hard job.  Jeff Bridges was nominated for best supporting actor for his Clintonian president in The Contender, but he was so charming and wily as to feel false.   Michael Douglas was painfully self-pitying in the The American President and while Kevin Kline’s president in Dave wasn’t supposed to be realistic (if you’ll recall, Dave was a look-alike brought in to replace the real president, a heartless prick who I much preferred), he was so “aw shucks” Opie I found myself rooting against him.

Even harder is playing a president we know.  Kennedy does not count, because most filmgoers didn’t live through his presidency, and even if they did, JFK is difficult to separate from a Hollywood character (in fact, Kennedy is the only president to have a film released about him during his presidency, and you can rest assured that PT-109 did not show Jack screwing the pooch by letting his ship get rammed by a Japanese destroyer).  So, we are convinced by awesome hair and a few “Bahstans” and “Cubers.”  Oliver Stone gave us two grotesque caricatures — Anthony Hopkins made Nixon a sweating bundle of nerves and ambition in Nixon (Frank Langella’s Nixon in Frost/Nixon was so much better) and Josh Brolin as a clownish, frat boy/oaf in W (I’m still waiting for the casting of Gerald Ford in The Mayaguez Incident).

This leaves John Travolta as Clinton.  Granted, I have been spoiled by the real Clinton, a masterful communicator and tactician, and in my judgment, perhaps the greatest American retail politician.  But Travolta misses Clinton’s flashes and confluence of weakness and sincerity, warmth and opportunism, self-pity and bitterness.  It is a tall order to fill, Travolta does his best, but mimicry is often what he is forced to rely upon.  When he is adored by crowds in the movie, I thought, “Oh come on. How could they be buying this?”  Granted, I usually had those thoughts when the real Clinton spoke to adoring crowds.  But I rarely questioned the sanity of others who were thinking “Yes! He feels my pain” while I was rolling my eyes.

Still, Travolta does well enough, and Nichols smartly never gets you rooting for him or anyone else.  That is critical to the film.  You may like Travolta and Thompson, but you feel tarnished for doing so.  You may hate them, but you recognize their failures in yourself and politicans you admire.