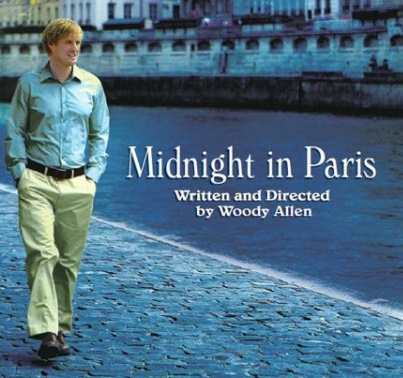 The movie starts off trying your patience with an overlong introduction of clarinet music and scenes of modern Paris. We are then introduced to American screenwriter Owen Wilson and his nagging, dispiriting fiancee, Rachel McAdams. Wilson is nervous and nasally and a noodge. McAdams is flat out hostile to Wilson. The idea that these two would ever be engaged is absurd. I kid you not, McAdams says to Wilson, “You always take the side of the help.” So, Wilson is married to a monster, doesn’t seem to know it, and yet, Allen wants us to care about him.

Worse, McAdams travels with her ugly American parents, who are (gasp) Republicans, distrustful of the French and country club obnoxious.

Allen makes the modern so unpleasant you can’t wait for Wilson to be transported to the 1920s. Sadly, we have to go to the 1920s with Wilson. And he’s doing Woody Allen, but whinier. He meets F. Scott Fitzgerald, Cole Porter, Ernest Hemingway, Salvador Dali, and Gertrude Stein says, “I was just telling Pablo . . .”

The greats are condescending, self-satisfied characters and they lord their superiority over all. Allen does the same thing, hiding it in his puny, nebbish persona, so his portrayal of them makes sense.

This movie is terrible. Perhaps Allen can still make a good picture. Match Point (2005) was a revelation and Vicky Christina Barcelona (2008) was charming, but he’s about done, and the nomination of this movie as best picture is ridiculous. The nomination as best screenplay is an affront. Perhaps Allen’s digs at Bush and The Tea Party explain it, but if not, and the Academy wanted to give him an unwarranted accolade, isn’t that why the Irving Thalberg award was created?

Some gems: “How long have you been dating Picasso. I can’t believe I’m saying that.”

Hemingway: “Have you ever shot a charging lion . . . Who wants to fight!”

“I wouldn’t call my babbling poetic, though I was on a roll there.”

“500 francs for a Matisse? I wouldn’t mind getting five or six.”

There are some funny moments when Wilson lapses into Seinfeldian chatter and the folks from the 1920s look at him funny. Adrien Brody is a hoot as Dali. The movie is also very pretty.

That’s not enough, notwithstanding the Academy and a 93% rating on Rotten Tomatoes.